Why Halloween Ends Has A Time Jump Explained By Director 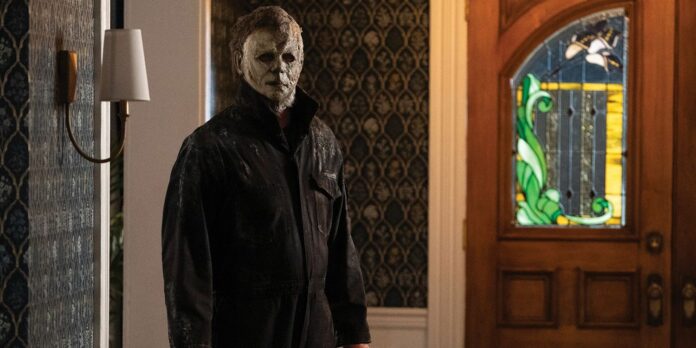 Director David Gordon Green explains why there’s a time jump between the end of Halloween kills and the beginning of Halloween ends. Four years after the events of Halloween kills, Halloween ends sees Laurie Strode (Jamie Lee Curtis) clash with Michael Myers (James Jude Courtney), who is terrorizing the town of Haddonfield for what will hopefully be the last time. Meanwhile, her granddaughter Allyson (Andi Matichak) becomes romantically involved with Corey Cunningham (Rohan Campbell), whose dark past begins to consume him after he encounters Myers in a sewer.

Instead of directly watching the events of Halloween killsthe film takes a different approach, introducing a new character with Corey, who becomes the primary focus of Halloween ends. As Allyson gets closer to Corey, Laurie begins to worry because she sees a part of Myers’ soul in his eyes. It’s a huge departure from what happened before in Halloween kills, which ended with a devastating cliffhanger. This is one of the main reasons why Halloween ends received poor reviews from critics and fans alike, as many found the conclusion disappointing, especially after revisiting the events of Halloween: resurrection for Laurie Strode to have a real “final chapter”.

Related: Does Halloween Ends Have A Scene After The Credits?

Now, in a recent interview with ColliderGreen explains why Halloween ends jumps forward in time from the events of the 2018 reboot of Halloween and Halloween kills. It started with where the last movie found Laurie, who was recovering from horrific injuries. The time jump enabled Green to discover new creative possibilities. Check out what he says about the time jump below:

Check Out:  Dwayne Johnson Recalls Being Told The Rock Couldn’t Be A Movie Star

“I don’t know it has turned into a radical form. There were things that we developed. When we wrote Kills and Laurie was bedridden because she would be because she had been stabbed a few times in the stomach, I knew we had to time jump. Or we decided after thinking about it. There was a period when it was all going to be one linear continuous type of movie. But then how are you going to get this climax out of her? So then we made decisions to evolve it and say, ‘Okay, there’s a time jump between Kills and Ends’, and it became a great opportunity and discovery of the fact that we can meet an optimistic Laurie Strode who may have gone into therapy and she’s decorating for Halloween, she invites this holiday out she makes pumpkin pies so we can see a Laurie who is in many ways the opposite of the Laure we met in 2018. And to me that just becomes a discovery you get by editing the script with me t my beloved co-writers and talking to the actors, turn a camera on things that work and work less and then trying to sculpt something you feel like is the most satisfying. Obviously Kills is just some sort of chaotic art movie centerpiece to me. It’s just a Michael Myers opera. And Then Ends I just wanted to build to make sure I felt emotional, I felt atmosphere, I felt romance. I wanted it to be a love song for the fans, and I don’t think anyone will see it coming. They certainly wouldn’t expect us to make some of the choices we’ve made.”

Check Out:  Terrifier 2’s Post-Credits Scene Explained (& How It Sets Up Another Sequel)

Has the Halloween time jump ended in his favor?

Halloween ends closing the franchise on a time jump certainly didn’t work in his favor, especially with how the last movie ended in a semi-cliffhanger ending. After Michael Myers brutally murders Karen (Judy Greer), a final showdown between Laurie and Michael seemed like the next logical step in the trilogy. One could argue that it is in Halloween H20: 20 years later and in Resurrectionbut since the new trilogy ignores the events of these two films, many would have appreciated a fitting ending to Laurie’s Michael Myers saga by keeping it simple.

Even with a time jump, Halloween ends focusing around a character not previously introduced in the past two films doesn’t feel like a good ending to a trilogy that was tentatively focused on reuniting Laurie Strode with Michael Myers. Halloween kills was a direct sequel to the 2018 Halloween reboot, which saw a more brutal version of Michael Myers than ever before. Should Halloween ends have followed in the footsteps of killsit probably would have gotten better reception than a conclusion to a trilogy that jumps ahead in time and focuses on a rivalry that isn’t Myers and Strode.