What Happened To Marilyn Monroe’s Mother In Real Life 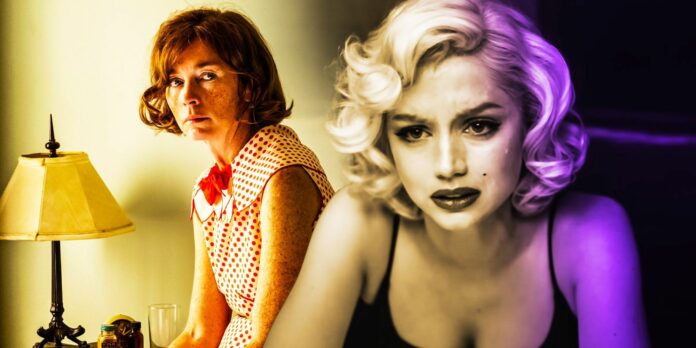 Gladys Pearl Baker, Marilyn Monroe’s mother, was pictured in the Netflix biopic, blond, but her portrayal leaves out important aspects of her real life. The Andrew Dominik movie has received some criticism lately regarding its inaccuracies in portraying Marilyn Monroe’s tragic life. The opening scene of Blonde, based on a Joyce Carol Oates novel of the same name, revolves around the part of Monroe’s childhood that she spent with her mother.

The first quarter of blond dramatize the relationship between Monroe and Baker around Monroe’s childhood before going into foster care. Baker is portrayed as unstable and deceitful. In one instance, she shows young Monroe a photo of Clark Gable and claims it is her father. In another, she drives Monroe and herself into a raging fire in Hollywood Hills and lies to a police officer about where they are going. After this, in a disturbing moment, Baker tries to drown Monroe in a bathtub. Shortly afterwards, in one of blondIn many black-and-white sequences, Monroe is sent to an orphanage and it is revealed that her mother has been committed to an institution.

RELATED: How Old Marilyn Monroe Was When She Died

In real life, Norma Jeane Mortenson (Monroe’s real name) was Gladys Pearl Baker’s third child, and her father’s identity was highly controversial until recently. Gladys Pearl’s first husband, John Newton Baker, took her first two children from her, leaving her as a struggling film editor, struggling with mental health issues. Throughout Marilyn’s childhood, her mother’s mental health problems worsened, leading to Marilyn being placed in foster care. After a violent nervous breakdown, Baker was committed to an institution for several years. Baker eventually reunited with Marilyn as her popularity grew, and then married John Stewart Eley, a man who had a secret family in Idaho. Her mother’s struggles led Marilyn Monroe, on the advice of her PR team, to tell the public that she was an orphan, despite the fact that her mother was still alive and her father’s identity was unknown. In 2022, DNA testing revealed that her father was Gladys Baker’s former colleague Charles Stanley Gifford. Eventually, a gossip columnist discovered that Baker was really alive and that Monroe was not an orphan. When news of Monroe’s true past broke, Baker suffered another nervous breakdown and was re-institutionalized. Monroe continued to send her mother a monthly stipend and left her a $100,000 trust fund after her death.

How accurate is Blonde’s portrayal of Marilyn Monroe’s mother?

Obviously there are some differences between blond‘s depiction of Gladys Pearl Baker, and her real life. blond film takes several liberties in creating screenplays between Norma Jeane and her mother that would not be public information because they took place behind closed doors. In particular, there is no evidence that her mother drove them into a fire or tried to drown her. The only proven facts presented in the film about Baker are that she was diagnosed with paranoid schizophrenia and was institutionalized. The main changes made by blond From real life are part of what has led to the backlash against the film.

The changes made by the film aren’t just limited to Monroe’s relationship with her mother. The film and novel are based on changing, embellishing, or completely fabricating key aspects of Monroe’s life around her relationships, pregnancies, and hardships. As blond doesn’t claim to be a biopic, but does draw heavily on Monroe’s life, leaving the film in a gray area. The director, Andrew Dominik, has said that: blond is not intended to be accurate, by stating:It’s all fiction in my opinion‘, a claim that can be complicated by the number of true events on which the film is based.