What Frank Did & Why He Shot Himself 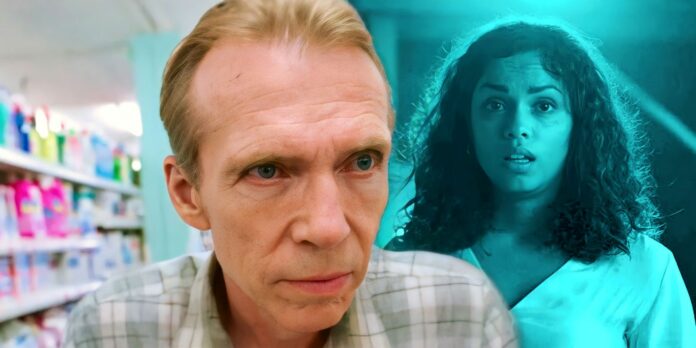 Barbarian leaves the public guessing, but many questions remain unanswered, such as what did Frank do with his victims and why did he choose his end?

Barbarian took the audience on a ride, but left some unanswered questions about the film’s true barbarian. While The Mother looked like the traditional movie monster, the real barbarian is only revealed in the third act in a flashback where Frank was introduced. Frank (Richard Brake) was a previous owner of the house and committed truly horrific deeds within its walls. Barbarian doesn’t give much information but reveals just enough to see how Frank committed his crimes and got away with it.

The flashback showed Frank following a young woman home and then dressing up as an electrician to enter her house. Once inside, he opened the bathroom window to enter later. Frank does this in a monotonous, seamless way that indicated he’s done this before. The number of tapes AJ (Justin Long) found also indicated that he had many casualties and this brief flashback showed how he got away with it for so long. The flashback ended when Frank entered his basement to a woman’s screams. While the flashback is short, understanding the real villain of the film and how he managed to get away with his crimes for so long was essential.

Why Frank Was Barbarian’s Real Villain

In the first act of BarbarianThe mother seemed to be the villain. While she was murdering Keith, she was the victim of Frank’s cruelty and knew only abuse. In addition to the women, Frank also abused the children according to the homeless man Tess encountered, meaning The Mother was a product of deep incest, apparently his daughter and granddaughter. Frank created the conditions that allowed The Mother to commit disturbing acts. The mother just wanted someone to be her baby and got angry when people didn’t fill that role, an anger she probably saw from Frank when she or other women misbehaved. The plethora of tapes AJ found shows that Frank had routinely sexually abused and filmed women for years. The dirty cages in the basement also suggested he locked up the victims who likely died of neglect. The Mother was bereft of affection and knew only the horrors Frank inflicted on her and others.

Why suicide was the only option for Frank In Barbarian

By the end of Barbarian, found AJ Frank who was bedridden and non-verbal. Frank probably didn’t have much time left, but AJ’s discovery of his lair led him to make the decision to end his life. AJ saw the tapes and threatened to call the police. While AJ scolded him and called him sick, Frank probably didn’t commit suicide out of guilt, but feared that his secret would finally be revealed. He shot himself to avoid the consequences of not only his sex crimes, but the creation and actions of The Mother. In Frank’s mind, he thought that suicide was the only way to solve the terrible predicament he found himself in. Due to the character of Frank, Barbarian compared the real barbarian of the movie to the victim who was mistaken for the monster.

Next: Why Keith Had To Die In Barbarian (And What Happened To His Body?!)