Wakanda Is Under Attack In Action-Packed Black Panther 2 Clip 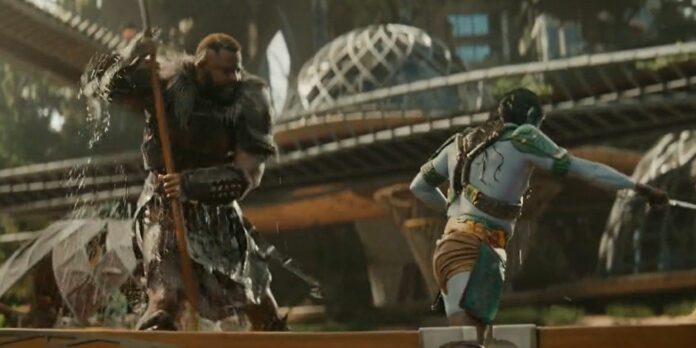 A new clip has been released of Black Panther: Wakanda Forever, in which the land is overrun and attacked by the underwater Talokan army.

A new video from Black Panther: Wakanda Forever sees the African nation under attack. Less than 2 weeks to go before the follow-up to Ryan Coogler’s Oscar-nominated superhero movie hits theaters, marking the end of Marvel’s tumultuous Phase 4. Black Panther 2 was originally intended to be a very different film from Coogler, but in the wake of the tragic passing of Chadwick Boseman – who played the titular King T’Challa – in 2020, plans for the film were completely changed. After Boseman’s death, T’Challa’s role was not recast, and Black Panther 2 will honor the memory and legacy of its original hero.

Black Panther 2 will reunite Wakanda’s leaders – Letitia Wright’s Shuri, Lupita Nyong’o’s Nakia, Danai Gurira’s Okoye, Winston Duke’s M’Baku, and Angela Bassett’s Ramonda – as they devise strategies to protect their futuristic African nation from new threats . The undersea nation of Talokan also plays a part in the story, with its king Namor (Tenoch Huerta) poised to play an important part. According to reports, Namor will display antagonism to Wakanda, causing a new hero in the nation to take on the mantle of T’Challa as the new Black Panther, protecting Wakanda from all invading forces.

Related: Marvel Is No Longer Hiding Shuri Is The New Black Panther

utilities DiscussMovie shared a new clip of Black Panther: Wakanda Forever and it sees all hell break loose in the nation. In the video, Wakanda is hit by a severe flood, endangering its people and infrastructure. Several Talokan soldiers also attack the Wakandans, leaving it to the group of heroes to protect the land and its people. Watch the video above.

Why are the Talokans attacking Wakanda?

‘s new clip Black Panther: Wakanda Forever does not make explicit whether the flooding in Wakanda would be caused by the Talokan forces. Yet there is no doubt that a serious conflict between the Wakandans and the Talokans will arise during the terrible catastrophe. As always, Shuri, Okoye, and M’Baku are on the front lines defending Wakanda, and above all, they prioritize protecting their own people rather than taking offense at the underwater invaders.

It has previously been suggested that Namor and his Talokan army will take action against Wakanda, alleging that T’Challa’s public disclosure of the truth about Wakanda has left them vulnerable. But, interestingly enough, the new Black Panther 2 clip doesn’t see Namor fighting alongside his Talokan soldiers. This could probably be because of a miscommunication between the Talokans and their feathered serpent god K’uk’ulkan, or it’s also possible that someone else – presumably the real villain of Black Panther 2 – would incite the Talokans to go to war against Wakanda. While the full extent of this battle in the midst of the deluge will become apparent only once Black Panther 2 hitting theaters, it’s nonetheless exciting to see the action, set pieces and cinematography remain just as epic as the original, with especially the visuals more vibrant and exciting than ever before.

Next: Wakanda Forever’s Biggest Mystery Is HOW There Will Be Another Black Panther