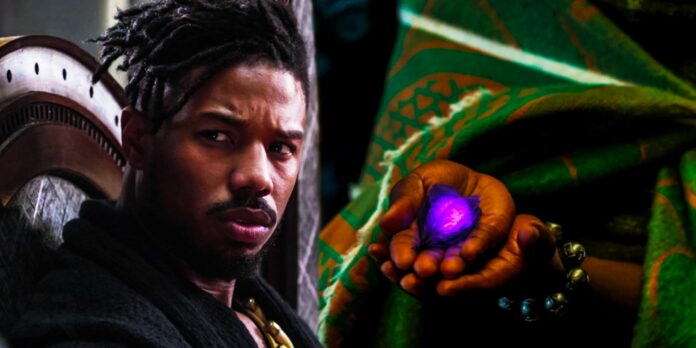 Whoever dons the suit will be at a direct disadvantage to his predecessor due to the lack of Heart-Shaped Herbs in Wakanda. As seen in Black Panther, the heart-shaped herb is a vibranium-infused plant native to Wakanda that can manifest superhuman abilities when ingested, including enhanced strength, speed, and agility. The heart-shaped herb also connects the Black Panther to the ancestral plane and allows them to communicate with the panther goddess Bast and earlier Black Panthers. However, in Black Panther Erik Killmonger (Michael B. Jordan) destroyed the carefully cultivated royal crop, meaning T’Challa and Killmonger should have been the last Wakandans to gain superpowers.

Related: Shuri Could Become The New Black Panther (In Honor Of T’Challa’s Memory)

Can Shuri replicate the heart-shaped herb?

Could Talocan be the key to finding more heart-shaped herb?

Talocan clashes with Wakanda Black Panther: Wakanda Forever. The underwater kingdom, ruled by Namor, is home to a unique ecosystem that may hold the key to finding more of the heart-shaped herb. It would make sense that, with such a large impact, debris from the meteorite that brought vibranium to Earth would be scattered around the world. While the vast majority of vibranium eventually ended up in Wakanda, it’s likely that such an impact also hit other countries to some degree, leaving tiny deposits of vibranium in hard-to-reach parts of the world, including perhaps the ocean floor.

Although Namor is a confirmed mutant, the rest of the Talocanians must possess superhuman abilities to survive at such depths. It is likely that, like the Wakandans, their evolution and culture were greatly supported by the presence of vibranium. With that in mind, the native plants, animals and mineral deposits can also be irradiated with vibranium. Should Shuri get her hands on these vibranium-rich plants and minerals, she may be able to replicate the heart-shaped herb.

Black Panther: Wakanda ForeverThe biggest mystery is not the identity of the new Black Panther, but how it is even possible for them to acquire powers at all. During his time as Black Panther, T’Challa combined the new and the traditional, using advanced technology created by Shuri in addition to ingesting the heart-shaped herb to enhance his human qualities. However, with the powerful plant nearly gone, the MCU’s new Black Panther will have to look elsewhere to get their powers, and if their quest sends them underwater, they may encounter an ancient civilization with a grudge.

Next: The Dora Milaje Shows How Black Panther 2 Can Work Without T’Challa