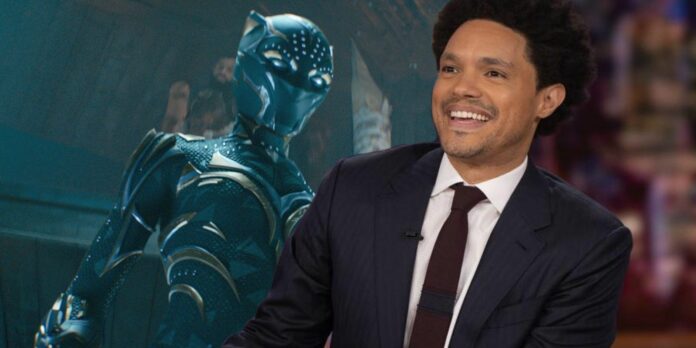 Trevor Noah gives a reluctant answer when asked if he’s returning for… Black Panther: Wakanda Forever. In cinemas next month Wakanda forever is the sequel to the hit MCU movie of 2018 Black Panther. Noah had a small but significant role in the first film, lending his voice to the role of Griot. Griot was an AI system that Shuri (Letitia Wright) created for use in her lab.

Wakanda forever will be greatly reformed from the original Black Panther film, as T’Challa actor Chadwick Boseman died tragically in 2020, and actor Daniel Kaluuya will not be returning as his character from W’Kabi due to scheduling conflicts. As such, Black Panther: Wakanda forever will take the time to dig further into the existing characters, including powerful female protagonists played by Wright, Angela Bassett, Lupita Nyong’o and Danai Gurira. The MCU sequel will also expand the universe with new characters. These new introductions include the antagonistic Namor the Sub-Mariner, played by Tenoch Huerta, and Riri Williams, aka Ironheart, played by Dominique Thorne. Ironheart is a relatively new addition to Marvel as a whole, as she first appeared in the comics in 2016 as a young woman who transforms into a superhero by designing her own version of Iron Man’s armor.

Check Out:  The Conjuring 4 Confirmed With Previous Writer Returning

“Trevor Noah: I hate spoilers. So I wouldn’t even ruin it for my friends to let them know I’m up to something. I really don’t. For example, I don’t watch trailers. I hate trailers. I like getting into the movie not knowing what’s going to happen, what’s coming, and not anticipating anything. … Did you notice that they will put something in the trailer that isn’t in the movie? And you wait for the whole movie and you think ‘heh…where’s the thing?’ . . I enjoy the experience of going to the movies, sitting with my popcorn, not knowing what’s going to happen and then just enjoying it. I want to take a ride, see what happens.

Nevertheless, Noah’s interview will leave some wondering how Griot would return if he returns for… Black Panther: Wakanda Forever. In the first film, Griot was mainly used in Shuri’s lab. However, given the addition of another tech genius in Ironheart, it’s possible that Griot could be appropriated for use by this newer superhero. Riri Williams’ inspiration, Tony Stark, of course, had his own AI system with JARVIS. So Riri would be keeping a special MCU tradition alive if she took on Griot, which would also give Noah the chance to appear in even more Marvel projects. Perhaps Ironheart can follow in Iron Man’s footsteps in yet another way Black Panther: Wakanda Forever and use its own AI assistant.