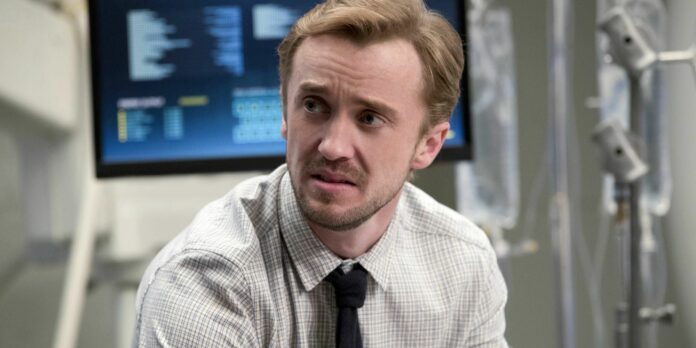 Tom Felton shares details of a terrible audition with Anthony Hopkins. The British actor first stepped into the limelight as a child when he was cast as bully Draco Malfoy in the Harry Potter franchisee. The films, based on the book series of the same name, first premiered with Harry Potter and the Philosopher’s Stone in 2001. Felton appeared in that film along with other young actors Daniel Radcliffe, Emma Watson and Rupert Grint. His Malfoy would be an important part of the whole Harry Potter franchise as he continued to terrorize the titular boy wizard and his friends.

The Harry Potter franchise was a huge milestone for Felton, making the actor famous from an early age. To this day he is still a big believer in everything Harry Potter. After the production of all eight films of the franchise over, the British actor has further developed his career, starring in films such as Netflix’s Message from the king, and a few British TV shows. Felton crossed over to the US for new opportunities and was on The CW’s The flash during Season 3, and had a few encounters that deeply marked his professional life — like the one time he auditioned for the 2012 Hitchcock movie and failed miserably.

Related: How Harry Potter Survived the Killing Curse in The Deathly Hallows

In a recent conversation with Josh Horowitz for the podcast Happy Sad ConfusedAfterwards, Felton talks about his career and his experiences in other projects Harry Potter. The actor recently released an autobiographical book called Beyond the magic wand, where he tells stories of growing up while in one of the biggest franchises in the world. He also talks about some of his good and bad auditioning experiences. One of the highlights of those disastrous moments in his career is when he auditioned for Hitchcock to Sir Anthony Hopkins:

I got the sides at the very last minute. I knew I was not suitable for the role. I had never seen Psycho and the movie was about making Psycho. I didn’t know anything particularly well, but I knew I wasn’t suited for this. I rarely called my agent before auditioning and said, “I really don’t think this is for me,” but on that occasion I did. And he said, ‘Just go in, show your face, show you know the work, and trot on. And yes, Anna Faris whispered to me, and she said ‘he’s in there!’ […] And I sat down across from Sir Anthony Hopkins, and he knew right away that I didn’t know what I was doing, and he decided to get off the book. He said ‘let’s set the scene and let’s test the water with the characters’. And I babbled out the worst three minutes of improv with a horrible American accent anyone’s ever seen. And he had a very graceful way of saying ‘leave’.”

Even Hitchcock didn’t work for Felton, the good news is he didn’t let that disastrous experience with Hopkins stop him from developing his career. Most likely, Felton went further by focusing on roles he knew he would be good for. With projects like Belle and Murder in the Firstthe one-time Draco Malfoy was able to continue exploring characters with prominent negative traits, building on the villainy he explored in Harry Potter. Felton has played other types of characters since the fantasy franchise, but it’s clear that his experience with Hopkins has taught him to play to his strengths. Felton is also involved in music, writing his own songs and sharing them online. In addition, he has also taken the time to contribute to philanthropic projects, such as Global Network and Milk + Bookies.

Interestingly enough, though his Hitchcock experience didn’t go so well there was a way that Harry Potter could have helped him. That franchise led him to work with iconic screen stars such as Alan Rickman and Helena Bonham Carter. In the future, Felton probably knew how to present himself in front of experienced performers. Unfortunately, that wasn’t enough to help him face Hopkins in the audition room. Maybe if he’s lucky, Felton will get a second chance to work with the actor in the future.