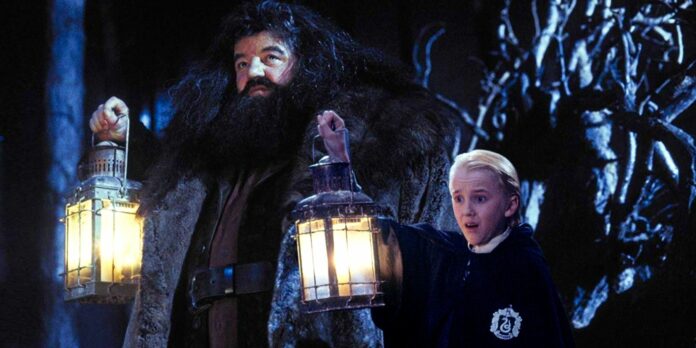 Tom Felton takes to Instagram to share a heartwarming tribute to him Harry Potter co-star, Robbie Coltrane, who passed away earlier this week. Best known for his role as Draco Malfoy in the Harry Potter movies, Felton shared the screen with Coltrane, who starred as the lovable half-giant, Rubeus Hagrid. Coltrane’s character has since become one of the franchise’s most beloved faces, given his warm demeanor and unwavering affection for the series’ titular hero, Harry Potter.

Earlier this week, many were shocked by the news that Coltrane had sadly passed away at the age of 72. In the days since this heartbreaking news, tributes have poured in for the actor who, in addition to his momentous work on Harry Potter, boasted an extensive career in which he has starred in a number of standout projects over the years. Coltrane is numerous Harry Potter co-stars have also shared their own sweet tributes to the late actor, including Daniel Radcliffe and Emma Watson, who both worked closely with Coltrane during their time as Harry Potter and Hermione Granger, respectively. Now Felton has joined his co-stars in remembering Coltrane in a sweet Instagram post.

Related: What Happened to Draco Malfoy After Harry Potter Ended

Felton shared a photo of herself along with Coltrane and Watson, as well as fellow co-star Rupert Grint, taken during what appears to be a promotional portion of Harry Potter and the Philosopher’s Stone’s 2001 release. In the photo, Felton and his young co-stars can be seen standing in front of Coltrane, who has his arms around them as they pose for the picture. In the caption, Felton shared a story about his experience filming a scene with Coltrane when he was only 12 years old, calling his co-star “a big gentle giantboth on-screen and off. Check out Felton’s post (above).

Check Out:  Every Cameo In Bros Explained & What They Mean

Coltrane’s legacy will live on in the Harry Potter movies

Despite Coltrane’s previous work, his role as Hagrid is probably his most memorable appearance for many, especially those who are longtime fans of the magical franchise. As a gardener at Hogwarts, Coltrane took on the role of Hagrid and established a character who has brought comfort to audiences around the world. Now, even more so, his performance as Hagrid will likely only continue to do that, as older footage has recently circulated on social media of the actor discussing how Hagrid will live on forever, even after he’s gone. Like Felton’s tribute, Coltrane’s Harry Potter co-stars have each echoed the same sentiment, that the actor was just as kind-hearted and funny as his on-screen counterpart.

Felton’s sweet story is just another heartwarming reminder of the impact Coltrane has had on the lives of many, not only those with whom he has worked closely, but also those who have supported and admired him from afar. As tributes continue to pour in for the actor, it is abundantly clear how missed he will be by audiences everywhere and what a huge presence he established, not just during his time in Harry Potter but throughout his career. Coltrane’s legacy will now live on thanks to his incredible talent and the huge impact he had on everyone who knew him.

Next: What Happened To Hagrid After Harry Potter Ended