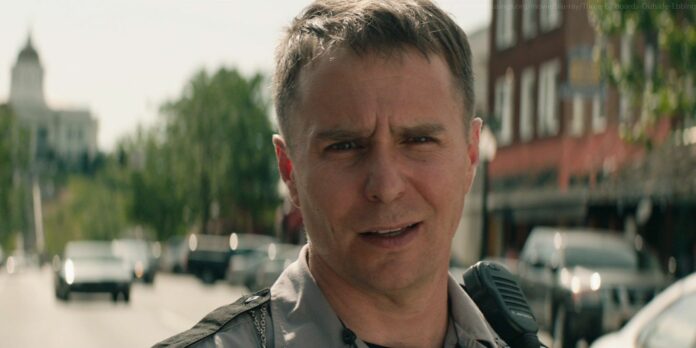 Director Martin McDonagh talks about the backlash over Sam Rockwell’s Oscar-winning role as a racist cop in Three Billboards Outside Ebbing, Missouri. Three Billboards follows a mother who sets up three large billboards outside her hometown of Ebbing, Missouri, intended to challenge the local police to find her daughter’s killer. The film has a great cast with Frances McDormand, who won an Oscar for best actress for the role, Woody Harrelson, Caleb Landry Jones, Abbie Cornish, Lucas Hedges, Peter Dinklage and Rockwell. The 2017 film was acclaimed by critics and also earned Oscar nominations for Best Original Screenplay and Best Picture, while Harrelson also garnered a nomination for his performance.

McDonagh has a history of writing raw but lovable characters, such as Colin Farrell’s Ray from In Bruges or any number of characters from Seven psychopaths. Three Billboards also saw McDormand play a similar character in Mildred, who was rude but likeable, and his latest movie, the upcoming The Banshees of Inisherin starring Farrell and Brendan Gleeson, promises to do the same. However, Rockwell’s Dixon, a racist police officer, received backlash from some audiences who disagreed with the character’s arc. Dixon starts out as a hostile character, is loathed by Mildred and the audience before finally helping her towards the end of Three Billboards. While many saw it as a character who saw the flaw of his ways and made a change for the better, some audiences disagreed with a racist character being given a moment of redemption.

While speaking with the guardMcDonagh touches the Three Billboards repercussions around Rockwell’s Dixon. He honestly conveys what he had hoped to achieve with the role, and how the audience didn’t quite understand his intentions. Check out McDonagh’s comments on the Three Billboards Outside Ebbing, Missouri comment below:

“I could see where that debate might be coming from, but I thought it wasn’t what I see in the movie. The ace in the whole idea was, what’s a villain and what’s a hero? But I don’t know. Basically, if someone calls your movie racist, and you wrote and directed it, they call you a racist. And I’ve always been against that, that, yeah, it’s hurtful. Nobody wants to be called that. . . . Put a warning in the program comments, sure, but let the character be who it is Trust that your audience has the intelligence to know I’m not using these words Characters should be what they should be If they’re nice , fine. If they’re homophobic, you should know it’s the character. If there are racist words, it’s to show an audience that this part of Ireland is racist. Or we’re going in a direction of a bland, innocent nothing.”

Three Billboards Outside Ebbing, Missouri isn’t the first film to deal with backlash over perceived racism. Even in recent years, there have been several movies that the public has hailed for questionable choices. For example,The Great Wall, a film about defending the Great Wall of China from monsters, was criticized for casting Matt Damon as the ostensible protagonist cited by many as another example of the long-standing white savior trope. The recent don’t worry baby sparked some backlash over the news that several scenes featuring KiKi Layne, the film’s most prominent black star, had been cut. These are in addition to several movies that have been accused of money laundering, such as: Ghost in the shell, Doctor Strangeand this year Bullet Train.

While Hollywood is far from perfect in terms of appropriate representation, often playing on clichés, the modern audience is less and less accepting of outdated ideas. Some filmmakers and actors have taken this to heart, such as Ed Skrein, who walked away from a role in the hellboy remake after its casting was labeled as money laundering. However, Three BillboardsDixon is a bit of an outlier, as the role has won several awards for Rockwell, with many supporting the redemption arc as a positive result. Therefore, even as Hollywood takes steps to appeal to these characters and stories to modern audiences, it’s often a fine line for filmmakers to walk, and not every viewer will agree with how delicate matters are handled. Still, Three Billboards Outside Ebbing, Missouri is a critically acclaimed film with the same love from most audiences, raising controversy over Dixon’s character.