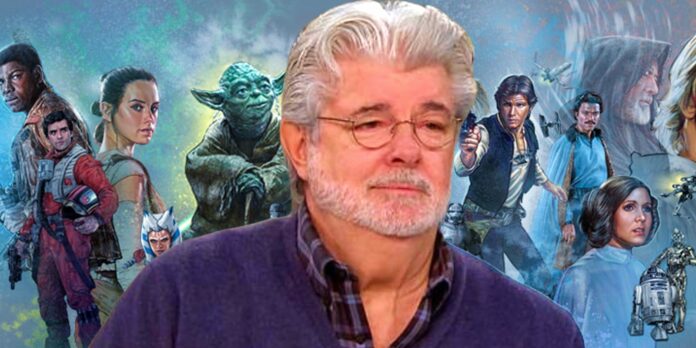 What is the correct order to watch Star Wars? George Lucas, the creator of the saga, has a definitive answer to one of pop culture’s biggest debates.

There is only one correct order to watch Star Wars – at least according to George Lucas. The watch order for the Star Wars movies has been a topic of discussion since the release of the Star Wars prequels, because Lucas decided to tell the original story of Darth Vader after completing the Luke Skywalker trilogy. The Star Wars Watch order debate got even more complicated after that the Star Wars continuation and the various Disney+ Star Wars shows, but Lucas had a strong opinion about it more than ten years ago.

According to George Lucas (via Vulture), the chronological order is the correct order to watch Star Wars. In other words, he believes someone who wants to look Star Wars should start with Star Wars: Episode I – The Phantom Menace, which is actually the fourth film in the release order. The interview with Lucas where he said this happened just before the release of Star Wars: The Force Awakensmeaning he only referred to Episodes I–VI. Still, according to Lucas, the prequel trilogy should be the starting point for the Skywalker Saga, with the original Star Wars movie, i.e. A new hopecomes in only after Star Wars: Episode III – Revenge of the Sith.

Why George Lucas wants you to watch Star Wars chronologically

George Lucas thinks of Star Wars Episodes I–VI as a single movie starring Darth Vader, who sees the saga as one big story divided into six episodes, so of course it starts with Episode I. The debate about the correct order to watch Star Wars stems from the fact that the prequels received a lot of criticism after their launch, a perception that has only recently begun to change. Lucas, on the other hand, has always been proud of the Star Wars prequels – it was the story he wanted to tell. Lucas also wants the public to know how “miserable” Darth Vader joins in A new hope (through rolling stone), which only works in chronological order.

It makes sense for George Lucas, the main creative force behind the Star Wars prequels, to suggest chronological order is the best way to watch Star Wars. He had said several times during the original trilogy that the story was incomplete, which is why Star Wars was renamed Star Wars: Episode IV – A New Hope in 1981. Also, when you consider how the revelation that Darth Vader is Luke’s father is widely known, even among those who have never watched Star Wars, the idea that the prequels spoil the original trilogy doesn’t hold true. Of Star Wars now releasing more content than ever, all taking place at a different point in the Star Wars timeline, chronological order can indeed work better for new audiences.

Between standalone movies like Rogue One: A Star Wars Story and Disney+ series such as The Mandalorian and Andorotry to follow Star Wars due to the release order can be difficult for a new audience. While George Lucas’s answer only referred to: episodes L-VIthe case for the Star Wars chronological watch order as the best now makes even more sense. The Star Wars sequels continue the story of the Skywalkers, even if the focus wasn’t always on them, meaning Lucas’ idea that it’s all one movie still makes sense.