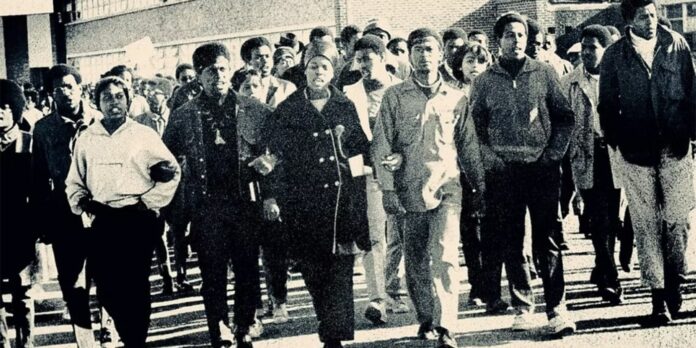 screen frenzy proudly presents an exclusive clip from the historic documentary the invaders which follows the Memphis-based Black Power group of the late 1960s. The documentary chronicles the group’s founding up to its final negotiation with famed activist Dr. Martin Luther King Jr., which took place just minutes before his assassination. the invaders examines the history of this Black Power group, race, economic injustice, and government oversight.

The Invaders have traditionally been portrayed as violent and anarchic, but the documentary reveals the true history of the group. The Invaders were inspired by powerful black activists such as Malcolm X and the Black Panthers, but in the late 1960s they caught the attention of another leader in the civil rights movement, Dr. king. In 1968 Dr. King Memphis to support a sanitation workers’ strike and met The Invaders. The documentary reveals what he spoke to them shortly before his murder.

screen frenzy‘s exclusive clip from the invaders includes interviews with John B. Smith and Juanita Thornton. Smith was a key member of The Invaders as a co-founder, and in the clip he recalls details of his meeting with Dr. king. He and Thornton explain that Dr. King was to communicate with and understand the Invaders and other Black Power groups. This was an opportunity for Dr. King to liaise with the Black Power organizations in every major city and potentially recruit them into a critical role in the civil rights movement. Smith not only remembers meeting Dr. King, but also the moment he learned of his murder.

More about the invaders

The invaders have long been misremembered and blamed for the violence that preceded the murder. However, this film reveals the truth about who they were, their goals, and the pivotal encounter they had with Dr. king. In reality, The Invaders were a grassroots movement with students and war veterans. Their activity soon caught the attention of not only civil rights activists, but the FBI as well. The documentary is unique in that it finally tells the full story from their perspective.

the invaders is directed by Prichard Smith. Nas, Yo Gotti, Craig Brewer, Peter Bittenbender, and Sacha Jenkins all produced the film. The documentary features interviews with several members of The Invaders, including not only John B. Smith, but also Coby Smith, Charles Cabbage and John Gary Williams.

Next: I Was On Woodstock 99: Here’s How Accurate Netflix’s Documentary Is

the invaders premiered at the DOC NYC Film Festival in 2015 and is now available digitally.