The Biggest Questions A District 9 Sequel Can Answer 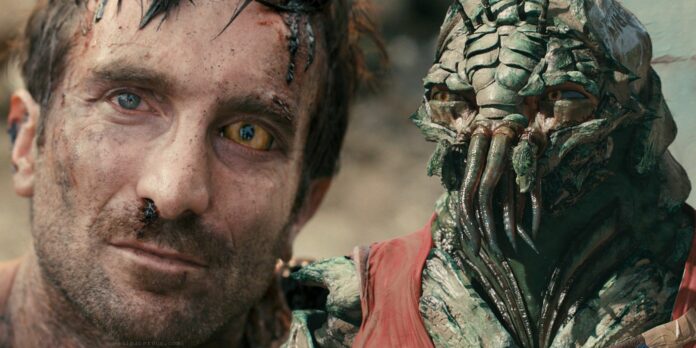 With news from District 10 are in development, District 9‘s lingering questions can finally be answered. District 9released in 2009 was an instant hit with audiences, earning $210.8 million at the box office, receiving high ratings from viewers (via Rotten tomatoes)and four Academy Awards nominations. District 9 dealt with alien refugees stranded on Earth due to a malfunctioning spaceship, and the chaos with South Africans, their hosts, that eventually ensued. The aliens, shrimp, as they were called, were marginalized, neglected and treated inhumanely throughout the film. People did not know them intimately, nor did they know the people who separated them. The people didn’t even ask what their breed or species was called, so the derogatory term “shrimp” stuck. The exploration of these challenging topics is part of what makes District 9 one of the best science fiction films of the last 20 years.

There was little understanding between shrimp, who were trapped on Earth, and the people who believed that they were both more intelligent and more powerful than the shrimp. The shrimp were also downgraded to a settlement, District 9, only to be moved further away from the people to District 10. It became clear during the film that the people were quite interested in shrimp’s weapons, which were much more advanced than Earth’s, and would only discharge into a shrimp’s hands, rendering them useless to humans. The South African military and MNU (Multi-National United) have put a lot of time and effort into learning about the shrimp through both physical experimentation and weapons research.

When the main character of the film, MNU agent Wikus van de Merwe (Sharlto Copley), was sprayed with liquid fuel that would help the shrimp escape from Earth, he became quite ill and began his own transformation into a shrimp. During that time, he was neither accepted by the shrimp nor by the people, so he hid in the shrimp’s ramshackle settlement. There he befriended Christopher Johnson, the shrimp that synthesized the fuel to leave Earth. District 9 ends up with no real answers, however, as Christopher heads back to his planet in his repaired ship, with the rest of the shrimp still stranded on Earth. And with Wikus no longer recognizable as a human, did the shrimp eventually accept him into their community?

What is the real value of the shrimp?

District 9 makes a very clear distinction between human and non-human, stating that as a major point of conflict, but the main organization driving the conflict is the MNU, which is doing genetic experimentation as a way to manipulate the aliens’ technology. When Wikus van de Merwe, during his transformation into the alien species, was used to fire weapons, people considered him “balanced”, that is, the ultimate manifestation of what MNU was looking for, a human by definition. , but with features (an alien hand) that could control the advanced weapons. The line of appreciation between each species had then faded, leaving the question of which species ultimately had more value.

Would Christopher Johnson return for his people, and what would happen if he did?

Christopher proved during District 9 that he was intelligent, persistent and clever. He spent twenty years quietly collecting and synthesizing the materials he needed to fly the wrecked spaceship that lay beneath his cabin. He proved he was capable of deceiving, like humans, when he told Wikus that he could heal him, but implied that it would take him three years to do so. It is doubtful whether Christopher could be trusted when he said that he will return to Earth for the rest of his people. And after witnessing the MNU’s experiments on its kind, it would be reasonable to expect it to land with weapons and an army at the ready. Either to liberate his people by force or to wage war on the planet.

Were shrimp a pure species or were they all derived from other creatures?

It’s a little hard to tell whether the shrimp were born shrimp or transformed into shrimp based on Wikus’ difficult transformation. It’s also clear that during their time on Earth, the shrimp seemed to have no desire to cause this transformation in humans. In fact, shrimp spent most of their time avoiding humans, mostly keeping to themselves. It was also clear that the shrimp didn’t seem to want to spread the planet with their kind. They were stuck on Earth and wanted to leave. There were also scenes of baby shrimp developing, so it’s clear that they reproduced, eliminating the need to increase their numbers by transforming other species.

Has MNU succeeded in its investigation?

Based on the number of shrimp being studied and the interest in the shrimp’s weapons, viewers would wonder if the MNU was successful in any of its research, especially after witnessing the transformation of Wikus. This transformation may have given the MNU more ideas, if only to unlock the weapons’ potential. If it were possible with Wikus, then nothing would stop them from experimenting with another unsuspecting human being. It would be important to know how much MNU has achieved in this endeavor, as successes could have heralded the end of the shrimp species on Earth. There is also the possibility of arms deals around the world if the MNU could unravel the secrets of the shrimp weapons. South Africa may have been able to replicate and sell the weapons they could obtain and test.

Did the people manage to move the shrimp to District 10?

After witnessing the transformation of Wikus and expecting Christopher to return for his people, it remains to be seen whether the shrimp migration from District 9 to District 10 was successful. Knowing that Christopher’s return to rescue them was imminent may have caused the shrimp to revolt again. Also, knowing that they are now both faster and more advanced than humans and have a distinct advantage through their weapons may have sparked a rebellion that would eventually shift the balance of power in favor of the shrimp. As demonstrated throughout the movie, people were really no match for the shrimp, and if they got together to fight back, they would definitely beat them.

What has become of Wikus?

At the end of District 9Wikus seemed to have adapted to his life as a shrimp, but still tried to maintain his human bonds. As his mind and body became more like shrimp, the question remains whether he would continue to care about people, and, perhaps more importantly, whether he would continue to care about people. being human. Wikus would have to wait another three long years, and that is if Christopher returned as promised, to begin the transformation back to a human. And that is if Christopher told the truth about his ability to turn him back. The question also remains whether something along the way could cause him to stop wanting to be a human, or if with the passage of time Wikus would assimilate with life as a shrimp and stay that way forever. Then what would be Wikus’ role among the shrimp, and would he be accepted or rejected because of his human origin? Like a human before, Wikus could share people’s plans and motivations with the shrimp in District 10, they were ready to mobilize for battle. Blomkamp has a chance to improve District 9the story with District 10 by tying up loose ends and answering the many questions of the original.

Following : District 10: why Blomkamp’s plan is better than a direct sequel to District 9