The Batman 2 Should Have A Sandman Crossover, Says Andy Serkis 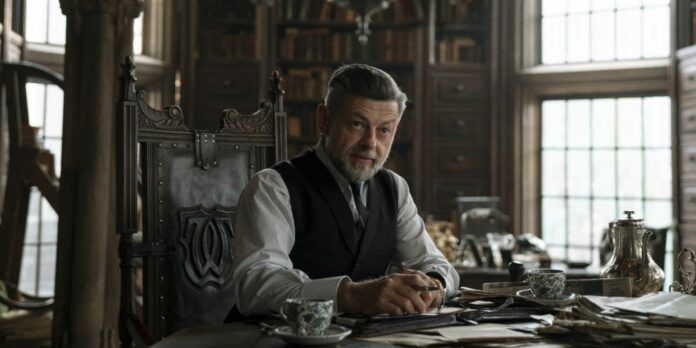 Andy Serkis, who plays Alfred in the batterplayfully contemplates a comic book crossover with the sandman in the future. the batter is directed by Matt Reeves, starring Serkis alongside Robert Pattinson, Paul Dano, Colin Farrell, Zoë Kravitz and Jeffrey Wright. The film was another reboot for Batman movies, as it operates independently of the DCU and focuses on the early years of Bruce Wayne’s tenure as the Caped Crusader.

the batter was a huge success, earning $770 million worldwide while satisfying critics and audiences alike. The film has also boosted the development of spin-off shows, with Farrell’s Penguin getting an HBO Max show in addition to a separate project on Arkham Asylum. Talks about a sequel started on the batter‘s release and was later announced at CinemaCon, with Reeves working hard on the project. However, with uproar at Warner Bros. with numerous DC projects, Reeves’ sequel will likely take some time to get underway.

Related: The Batman 2: Mr. Freeze is the perfect villain to test Bruce Wayne

During an exclusive interview with screen frenzySerkis tells what he hopes The Batman 2 can entail. While he has no concrete information about what Reeves plans for the follow-up, Serkis does give the director his due and compliments his work. Serkis then comes up with a fun crossover idea for the sequel’s villain. Check out Serkis’ teasing comments the batter continued below:

“I don’t know where we are now with Alfred. I just don’t know where that is going. I’m sure Matt Reeves is going to make something incredible because he always does. He’s another formidable storyteller who is always for the heart. If villain I’d like to see… Sandman. [Laughs] A bit of an intersection. I think that would be interesting.”

Check Out:  The Conjuring 4 Confirmed With Previous Writer Returning

Given that the batter is not affiliated with any other DC movies, it can play by its own rules, leaving the sequel open to many options, including which villains can appear. While Serkis’ comment is an interesting and humorous idea, DC even owns Neil Gaiman’s the sandman, it’s a crossover that probably won’t happen. However, Batman’s rogues’ gallery offers plenty of unique choices that fit into the dark, gritty world Reeves has established.

Fan-favorite villains always have potential, as the public loves them, leading to the appearance of characters like Poison Ivy, Mr. Freeze or Scarecrow are all possible. However, Reeves has created a world that might be better suited to the hero’s darker, more sadistic villains, with the batter already teasing the Joker. Villains like Hush, Professor Pyg, or Two-Face may fit into the universe, adding to the dark nature of Gotham seen in the batter. Characters like Hush would also help keep the movies grounded and far away from some of The Dark Knight’s more colorful antagonists like Man-Bat or the ridiculous Condiment King. Still, with the batter‘s sequel in the very early stages, anything is possible with a plethora of characters to choose from.