The Banshees of Inisherin Ending Explained 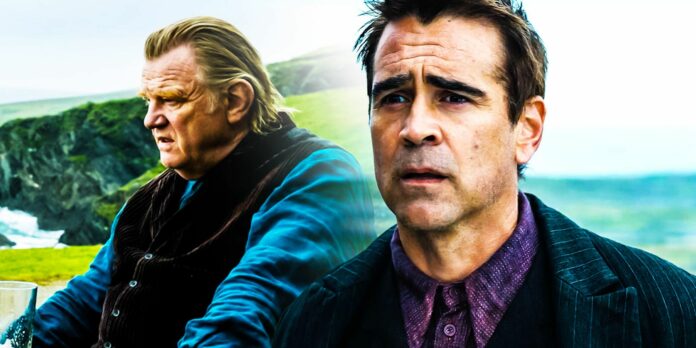 The Banshees of Inisherin‘s unusual plot sees the good-natured Pádraic (the batter actor Colin Farrell) slowly unravels after his former boyfriend, Colm (Brendan Gleeson), abruptly refuses to talk to him. While Pádraic’s sister Siobhán (Kerry Condon) and troubled local boy Dominic (Barry Keoghan) try to defuse the couple’s escalating struggle, their efforts prove fruitless. By the end of The Banshees of InisherinDominic is dead, Siobhán has left Inisherin, and Colm has committed an irreversible act of self-mutilation, inadvertently turning Pádraic into an enemy for life.

Related: The End of the Invitation Explained

What happens in The Banshees of Inisherin’s Ending?

Surprisingly, none of the film’s main characters die at the end of The Banshees of Inisherin. However, Dominic is not so lucky. Pádraic speaks to Colm, despite the latter repeatedly warning him that he would cut his own fingers if he did. Meanwhile, Siobhán gently rejects Dominic’s romantic advances and moves to the mainland for a library job. True to his word, when Pádraic tries again to mend the friendship, Colm cuts off his fingers with scissors and throws them at the door of Padraic’s cottage. Jenny, Pádraic’s beloved pet pony, eats one of the severed fingers, chokes and dies.

In retaliation, a heartbroken Pádraic sets Colm’s house on fire with Colm in it. The local police officer, Peadar (Gary Lydon), who is also Dominic’s sexually abusive father, sees this and rushes to Pádraic’s house to beat him senselessly. Along the way, he meets the elderly Mrs. McCormack (Sheila Flitton), who wordlessly leads him to his son’s drenched corpse. Barry Keoghan’s character commits suicide off-screen, disillusioned by the depth of Pádraic’s cruelty, Siobhán’s departure and his father’s sexual and physical abuse. The next morning, Colm meets Pádraic and suggests that their feud is over. Pádraic informs his former friend that Colm’s debt will not be settled until one of them is dead.

Creepy Mrs. McCormack seems like a nasty old woman at first when introduced early The Banshees of Inisherin. Later, however, she takes on a more sinister meaning as she is more like the titular mythological figures, and Pádraic warns that one or two of the dead will visit the island before the month is up. Although there are no literal banshees in The Banshees of Inisherin, Mrs McCormack’s prediction turns out to be correct. Dominic dies and Mrs. McCormack is the one who finds his body, while Pádraic’s prized pony, Jenny, can be considered the second death of her prophecy if animals count.

However, this is more than likely a self-fulfilling prophecy. Mrs. McCormack is originally established as a nosy neighbor and an obnoxious gossip, so it stands to reason that she told Pádraic about these possible deaths in order to exacerbate his existing paranoia and escalate his fight with Colm. Like most parochial, hateful residents of Inisherin, Mrs. McCormack struggles to leave Pádraic alone when the opportunity to mess with his head is available. So if her prophecy comes true, it’s both because she’s playing with Pádraic and is evidence of supernatural happenings.

Is the feud between Pádraic and Colm finally over?

The feud of Pádraic and Colm is empathetic not over at the end of The Banshees of Inisherin. While unhinged enough to cut off his fingers to get some space from Pádraic, Colm shows real remorse for the first time when he learns that he accidentally caused Jenny’s death. This, along with the loss of his home to a fire, leads Colm to assume that he and Pádraic are now equal. However, Pádraic’s character has also undergone a meaningful change, leaving the kindness that defined him at the beginning of the film. In The Banshees of InisherinAt the end, Pádraic decides mutually assured destruction over peace.

While Colm hopes to secure a musical legacy for himself by taking some distance from his former friend, he instead ignites a feud that looks like it will kill them both. While Pádraic started The Banshees of Inisherin Blissfully oblivious to the limitations of his small-town existence, the film’s story ends as a spiteful, hate-fuelled figure with no interest in reconciling with Colm. While the couple has maintained their shared humanity – as evidenced by the tragicomic moment when Colm thanks Pádraic for taking care of his dog and Pádraic assures him it wasn’t a problem – their relationship has been destroyed beyond repair.

What the Banshees of the End of Inisherin Really Mean

Like the end of Three Billboards Outside Ebbing, MissouriMartin McDonagh’s previous film, The Banshees of Inisherin‘s final scenes are left ambiguous. To understand The Banshees of InisherinAt the end, the historical and cultural context of the setting is important. The film is set in 1923, at the height of the Irish Civil War, on a fictional Irish island whose name translates to “the island of Ireland.” While Irish literature, poetry and music from a few years earlier rightly celebrated and immortalized the triumphant defeat of English colonial rule in Ireland, few works mythologize the ensuing civil war. There was nothing beautiful, uplifting, or awe-inspiring about a war that split families and pitted friends against each other.

The Banshees of Inisherin sees Colm trying to cement an artistic legacy for himself by giving up niceness, but this leads Pádraic to note that Colm hypocritically sees nothing wrong with befriending a corrupt police officer who abuses children, while refusing to talk to Pádraic because he “dull.” By the end of The Banshees of InisherinColm longs for a return to the dullness of his former friendship, no longer enamored with romantic ideals of suffering now that he has lost his fingers and his home to a futile battle of will. However, he and Pádraic cannot go back, because like the country they are so close to, they are now divided by their differences and engaged in a fight that will ultimately cost them their lives. In The Banshees of InisherinIn the end, Colm gains the terrifying beauty, artistic inspiration and deep meaning he sought, but it comes at the cost of his friendship with Pádraic, his home, and, ironically, even the ability to play the mournful music he so likes.

Next: The End Of My Police Officer Explained (In Detail)