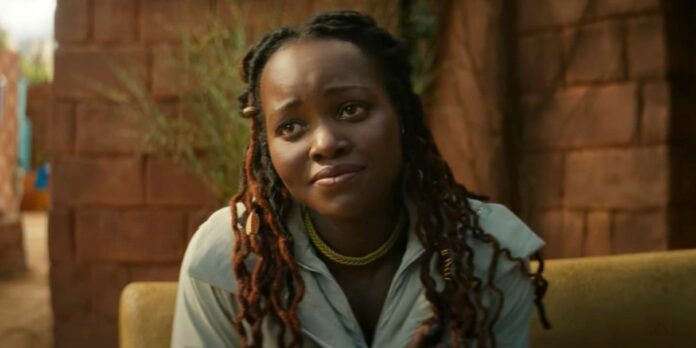 a new Black Panther: Wakanda Forever clip shows Nakia and Okoye discussing T’Challa’s death. Chadwick Boseman joined the Marvel Cinematic Universe as T’Challa in Captain America: Civil War and after his 2018 solo film, Black Panther, was a billion-dollar Oscar-nominated success, he became one of the franchise’s main stars. After a long and personal battle with colon cancer, Boseman passed away in August 2020 and the tragic news came as a shock to the world.

Boseman’s absence will be deeply felt in the sequel that shifts focus from T’Challa to much of Black Panthersupporting characters, including Lupita Nyong’o’s Nakia, a river tribe war dog, Danai Gurira’s Okoye, the head of the Dora Milaje, Letitia Wright’s Shuri, T’Challa’s younger sister who designs new technology for the nation, and Angela Bassett’s Ramonda, the Queen Mother of Wakanda. In the sequel, these characters will mourn the death of King T’Challa, as a new threat emerges in the form of Namor (Tenoch Huerta), king of the undersea nation known as Talokan. After the world premiere Black Panther: Wakanda Forever reactions began to surface online that are united in their praise of the moving Marvel sequel.

Related: Shuri Could Become The New Black Panther (In Honor Of T’Challa’s Memory)

Shortly before the world premiere, the Black Panther cast appeared on Jimmy Kimmel Live to discuss Wakanda forever and in honor of Boseman’s memory. During their appearance, a new Wakanda forever clip was released in which Nakia and Okoye discuss T’Challa’s death. Watch the new clip above, courtesy of @bpanthernews on Twitter.

How Black Panther 2 will honor the memory of T’Challa

After Boseman’s death returns Black Panther director Ryan Coogler and his co-writer Joe Robert Cole reworked the sequel to address T’Challa’s absence and honor the late actor’s legacy. Just as the world did with Boseman, the Black Panther sequel will see the people of Wakanda mourn the loss of their king. While there have been calls for the MCU to recast T’Challa, Marvel is united in their decision to let the character rest out of respect for Boseman and pass his Black Panther mantle on to another character to continue his legacy. .

The trailers of the sequel have revealed a funeral that will be held for T’Challa and it has also been confirmed that Wakanda forever will contain a time jump after his death of about a year. During this time, Nakia appears to have left Wakanda for an unspecified reason and was not present for the funeral, as discussed in the new clip. The clip also gives a taste of how the characters are still coping with the death of T’Challa, mainly Nakia. To her, T’Challa was more than just the king of Wakanda and the Black Panther, but someone she had a close, intimate relationship with. She is just one of many characters who will have a deeply emotional reaction to T’Challa’s death in Black Panther: Wakanda Forever.

Check Out:  Halloween Ends Director On If Michael Myers Is A Supernatural Being
Share
Facebook
Twitter
Pinterest
WhatsApp
Previous articleNew Avatar 2 Update Further Proves The Sequel Will Be Worth The Wait
Next articleOne Terrifier 2 Scene Idea Was Too Disturbing For The Director