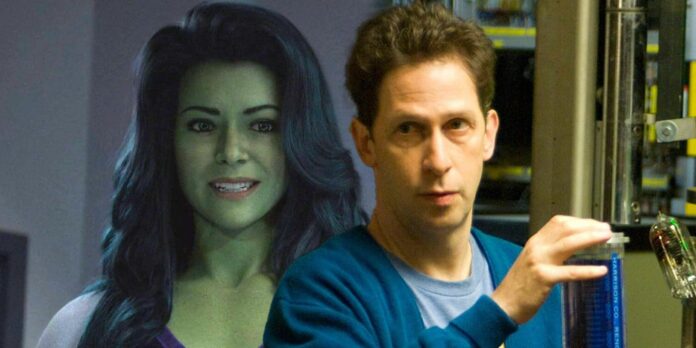 While the public is still reeling from confirmation of his imminent return, it seems Captain America 4 villain The Leader was almost seen with She-Hulk: Lawyer. The latest Marvel Cinematic Universe series featured a wide variety of new and returning faces in the comic book franchise, including Tatiana Maslany’s titular heroine, Mark Ruffalo’s Hulk, Charlie Cox’s Daredevil, Benedict Wong’s Wong, and Tim Roth’s Emil Blonsky. She-Hulk: Lawyer revolves around Jennifer Walters as she gains her cousin’s Hulk powers in a car accident and quickly becomes a celebrity lawyer for superhumans.

Emil’s return in She-Hulk: Lawyer turned out to be an interesting bit of character development for both the former villain and the Hulk family, forcing them to confront his troubled past with Bruce. In the meantime, the series largely deviated from the typical MCU formula by not having a major villain for most of the series, except for Jameela Jamil’s Titania in her recurring appearances and a mysterious HulkKing, who turned out to be Jon Bass’ misogynistic billionaire Todd Phelps. to be. While some have been eager to see an actual villain to take on the titular heroine in the show, it seems She-Hulk: Lawyer acted almost as a springboard for the return of a major opponent.

Related: We Might Finally Know What Happened To The Leader After Incredible Hulk

While speaking with ComicBook.com to tear down the show after the finale, Jessica Gao . reveals She-Hulk: Lawyer almost included Captain America 4 villain, the leader. The MCU series creator admitted she couldn’t remember how plans were eventually scrapped to make Tim Blake Nelson’s character appear, but her original pitch for the show included him. Check out what Gao shared below:

In my original pitch I did have The Leader there. Just as an option, as a suggestion, you know? But really, I can’t remember why [it was scrapped]. I don’t remember if it was pulled out organically because we just came up with other stuff, or if we were told no. I honestly don’t remember. But consideration was given to bringing him back or making a new version of Leader, or having a relationship with him. But, I mean, this was three years ago, and the show has evolved so much that I can’t remember what actually happened.

Despite the role of Tony Stark from Robert Downey Jr. in the movies, in 2008 The Incredible Hulk is largely considered a forgotten chapter in the MCU, mainly for Edward Norton’s recast with Mark Ruffalo, born of the former’s desire for creative control. As such, certain characters and plotlines were left aside as the franchise continued to unfold in other directions, including the lineup of Tim Blake Nelson as Hulk’s iconic nemesis The Leader. Some steps would be taken to reconcile the MCU’s canonical ties with The Incredible Hulk in Captain America: Civil Warwith William Hurt reprising his role of General Thunderbolt Ross and continuing to play him in both Avengers: Infinity War and Endgame and Black Widowhis last turn as the character prior to his death.

While The Leader may not have finally appeared in She-Hulk: Lawyerthe latest MCU series marked another important step in reconnecting with The Incredible Hulk with the return of Roth’s Abomination. In addition, with Captain America: New World Order which will feature both Nelson’s The Leader and Thunderbolt Ross, though now played by Harrison Ford in the wake of Hurt’s death, those who have enjoyed the second installment in the MCU will certainly be excited to see it finally get more canonical with the larger franchise. The public can revisit the lineup for The Leader’s arrival withThe Incredible Hulk streaming now on HBO Max.