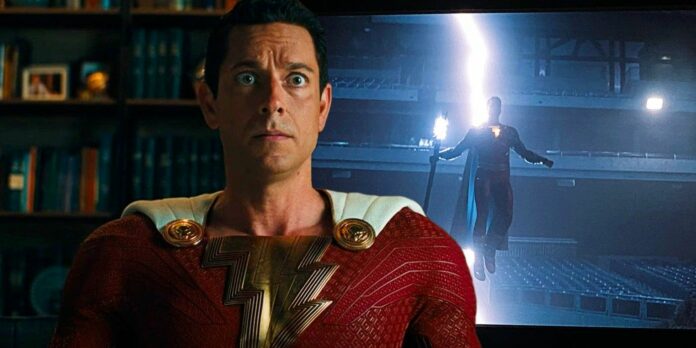 Shazam: Fury of the Gods is now complete and director David F. Sandberg is sharing an epic BTS image of Zachary Levi’s hero to celebrate.

Director David F. Sandberg shares a new behind-the-scenes look at: Shazam: Fury of the Gods with an epic hero shot to celebrate the end of the film. The release of the first Shazam! film in 2019 represented a possible shift for what was then known as the DC Extended Universe. With a lower budget and a more light-hearted tone, the film’s development is partly why Walter Hamada took over DC Films after Justice League. The film’s highly positive critical response and solid box office performance enabled DC and Warner Bros. able to give the green light for a sequel. Shazam: Fury of the Gods David F. Sandberg returns as the director and duo of Asher Angel and Zachary Levi who bring Billy Batson/Shazam to life.

Development on Shazam 2 has been underway since 2019 and was originally slated to debut in theaters in April 2022, roughly three years after the original film’s release. COVID-19 caused a few delays for the sequel, meaning audiences will now have to wait until March 2023 to see the film. Shazam: Fury of the Gods focuses on Shazam meeting the Daughters of Atlas, played by Helen Mirren, Lucy Liu and Rachel Zegler. DC and WB have released only one trailer for the sequel so far, such as Shazam 2‘s release date is still more than four months away.

Related: Shazam’s Greatest Power Is Missing From The DCEU (It Would Be Too Strong)

Now director David F. Sandberg shared an important update on Shazam: Fury of the Gods. He shared a behind-the-scenes look at the sequel to celebrate the fact that Shazam 2 is now ready. The photo is from an epic hero shot with Shazam resembling him with the wizard’s staff or another magic staff. Based on his tweet, it appears that all elements of post-production are now complete and he will be given some time off to work on the film until the publicity tour kicks off sometime next year.

The confirmation that Shazam: Fury of the Gods is completed comes amid a massive change for DC’s future. It was recently announced that Peter Safran and James Gunn will lead DC Studios and replace Walter Hamada and DC Films. Gunn and Safran’s First Official Day to Run DC Studios Now Comes the Day After Shazam 2 is ready. Although they didn’t lead DC during the development of the sequel, Safran is a producer on the film, so he was able to provide all of his input. There’s even a chance James Gunn gave some feedback at one point because he worked with DC and has a good relationship with Safran.

The big takeaway here is that? Shazam 2 should not undergo major changes as a result of DC Studios’ new leadership. The old DCEU was repeatedly crippled by new management and visions for the future, resulting in late production changes such as Justice League‘s reshoots. James Gunn and Peter Safran are unlikely to force changes in Shazam: Fury of the Gods now Sandberg has announced that he is done working on the sequel. This should mean that Shazam: Fury of the Gods is the exact movie Sandberg wanted to make when it comes out next year.

Following : All 5 DCEU Movies Set Up By Black Adam