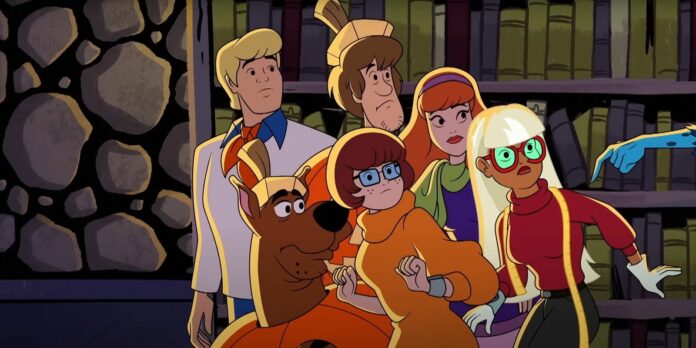 On social media a new clip of Trick or Treat Scooby-Doo! reveals that Velma is in love with another girl, and fans are thrilled. Scooby Doo is an iconic media franchise, with the first animated series created by Hanna-Barbera Productions in 1969. Over the decades, Scooby and the Gang have appeared in several spin-off series, crossover specials, and countless animated and live-action films. While each iteration is slightly different, the series follows Mystery Inc., a group of amateur detectives who unmask costumed criminals terrorizing the city of Coolsville.

Scooby-Doo and guess who?, the latest incarnation, first aired on Boomerang’s streaming subscription in 2019 before moving to HBO Max in 2021. Following on from the direct-to-video crossover films, the Mystery Inc. enlist the help of celebrities, classic cartoon characters, and DC superheroes to unravel the weekly mystery. The animation is reminiscent of the classic Scooby-Doo, where are you! style, capitalizing on the nostalgia of fans who grew up watching the series. The cast of Guess who? starring original voice actor Frank Welker as Fred Jones, Matthew Lillard, who previously played Shaggy in the live-action films, Gray Griffin who reprises Daphne, and comedian Kate Micucci who returns as Velma.

A clip from the latest movie Trick or Treat Scooby-Doo! has caught the attention of fans on Twitter, who are ecstatic to see Velma fall in love with another girl. The scene revolves around fashion designer and crime boss Coco Diablo who is murdered by Mystery Inc. is called in to help stop the gang’s doppelgänger ghosts and their classic enemies from threatening to destroy Halloween. The viral scene shows Velma seeing Coco for the first time and noticing her sense of style, brilliance and love for cats. Velma blushes, fogging up her glasses as she mumbles her iconic catchphrase “Jinkies.” Watch the clip and fan reactions below:

Check Out:  Halloween Ends Was Never Going To Be About Michael & Laurie, Says Director

Velma Dinkley is a character who has been consistently queer-coded in all of her various appearances in the franchise, leading fans to speculate about her sexuality. In 2020 James Gunn (Guardians of the Universe) revealed that in his original script for the 2002 live-action Scooby Doo, Velma is written as an outspoken gay character. Gunn expressed disappointment, claiming that Warner Bros. continually watered down his script until any reference to Velma as gay was completely removed. Tony Cervone, creator of the 2010 animated series Scooby-Doo: Mystery included, also stated that his iteration of Velma was in fact gay. Cervone says that if… Mystery included had been picked up for additional seasons, the series would have explored Velma’s relationship with Marcie Fleach.

Long time Scooby Doo fans rave about confirming Velma’s sexuality with the most concrete example yet. Often, queer characters must present in a coded manner to avoid criticism from studio heads and advertisers, who may see the addition of such characters as a risk to their bottom line. While some may consider this a long time, it’s a huge step that Velma is finally canonically gay after 50 years. Trick or Treat Scooby-Doo! is available to watch via digital purchase and will premiere on Cartoon Network and HBO Max later in October.

Check Out:  Nicolas Cage Was Never Paid For His One Oscar-Winning Role
Share
Facebook
Twitter
Pinterest
WhatsApp
Previous articleNintendo Fans Brace Themselves For Chris Pratt’s Mario Voice Reveal
Next articleDodgson’s Death In Dominion Has A Deeper Meaning Than You Realize