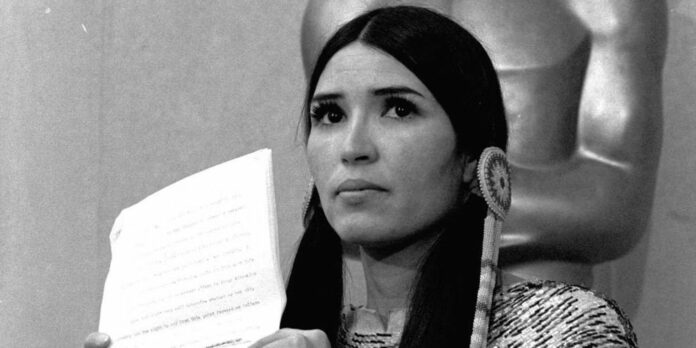 Influential actor and activist Sacheen Littlefeather passed away at the age of 75. Littlefeather was an Apache/Yaqui model and actor who appeared mainly in films in the 1970s such as The trial of Billy Jack, winter hawkand Johnny Firecloud. She was also an Indigenous rights activist who was to appear in the 2009 documentary Real Injunexploring the role of indigenous peoples in film.

Littlefeather is most famous for her appearance at the 1973 Academy Awards, where she filled in for actor Marlon Brando. Brando was nominated for his role as Vito Corelone in the godfather, and was considered the favorite to win. However, Brando chose not to attend the Oscars at the last minute and boycotted the ceremony to draw attention to the standoff at Wounded Knee, South Dakota. Brando asked Littlefeather to take the stage in his place if he won, and gave her a pre-written speech to read on his behalf. Brando won Best Actor and Littlefeather took the stage, but due to time constraints, she shortened Brando’s 739-word speech to a shorter message that draws attention to Native American representation in film and television, and to the siege at Wounded Knee. Although Littlefeather’s speech was short and courteous, she received a mixture of boos and cheers from a divided audience. In June of this year, Littlefeather received an official apology from the Academy.

Related: Why Marlon Brando Turned Down His Oscar For The Godfather

Littlefeather died on October 2, 2022, surrounded by her loved ones at her home in Novato, California, as reported by THR. She was 75 and died of metastatic lung cancer. Littlefeather had been battling cancer since the 1990s, when she was diagnosed with colon cancer. In 2018, she developed stage 4 breast cancer, a recurrence of the breast cancer she was first diagnosed with in 2012. The cancer has spread in recent years, leading to terminal illness.

Check Out:  The Rock's DC Movie Isn't The Best Or Worst

With serious health problems that lasted her entire life, Littlefeather worked closely in health and medicine after the famous Oscars speech. In the late 1980s, she became involved with the American Indian AIDS Institute of San Francisco and worked at an AIDS hospice founded by Mother Teresa. Littlefeather was also the recipient of several awards, including the 1986 Traditional Indian Medicine Achievement Award and an Achievement Citation from the Catholic Health Association of the United States.

While Littlefeather may be best known for her Academy Awards speech, her role as an Indigenous activist and health activist had a significant impact. The Academy apologized to her just months before her death, but she described receiving it as “a dream come true.” small feather raised many important indigenous issues, especially the display of Native Americans on screen, and her work will never be forgotten.

Next: The case for politics at the Oscars