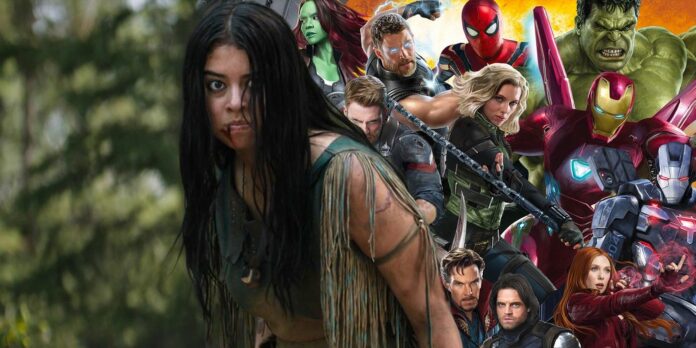 Prey star Amber Midthunder reveals her hopes of being part of the Marvel Cinematic Universe in the future, but keeps her mouth shut about who she wants to bring to life.

On the heels of her success with the Predator franchise prequel, Prey star Amber Midthunder shares her hopes of joining the Marvel Cinematic Universe. Midthunder first became famous in FX’s Legion, an adaptation of the Marvel Comics character as Kerry Loudermilk, the mutant who shares a body with Bill Irwin’s Cary, who only ages when outside his body, but also retains superhuman strength. The 25-year-old actor has since become known for her roles in The CW’s new adaptation of Roswell, New Mexico and the Liam Neeson-led action thriller the ice road.

Nearly 15 years since its launch, the MCU is still one of the biggest franchises in Hollywood, attracting a variety of talent, both high-profile and emerging. In recent years, the MCU has expanded its roster of racially diverse heroes and characters, including Simu Liu’s Shang-Chi, Iman Vellani’s Kamala Khan, and Brian Tyree Henry’s Phastos. As The Multiverse Saga continues to unfold with the coming Ant-Man and the Wasp: Quantumania and Avengers: The Kang Dynastyan actor is eager to join in the superhero fun of the MCU.

Related: Marvel May Have Answered a Big Avengers Post-Thanos Mystery

While speaking with Variety at the Newport Beach Film Festival, Amber Midthunder opened up her thoughts about joining the MCU. The Prey star reacted enthusiastically to the idea of ​​joining the ongoing comic book franchise, but kept her mouth shut about who she would play for it. Check out what Midthunder shared below:

I am definitely a huge MCU fan. I’ve always loved the X-Men movies, all the Avengers movies. I’ve always been a big fan of the MCU. We will talk about [who I could play] later.

Who could play Amber Midthunder in MCU?

Interestingly, if Midthunder were to join the MCU, it would be her second time in a Marvel role after FX’s Legionwhich took place in an alternate timeline of Fox’s X-Men franchisee. Since the MCU has recently started building branches with the X-Men franchise after the appearance of Patrick Stewart’s Professor X in Doctor Strange in the Multiverse of Madness and both Ryan Reynolds and Hugh Jackman’s return in Deadpool 3, it would be interesting to see if Midthunder could reprise her role of Kerry from the critically acclaimed series, especially given her love for the character. However, it’s still unclear how the return of Jackman’s Wolverine and Reynolds’ Deadpool will play into the original. X-Men timeline, it seems otherwise unlikely that she could bring her Legion character back.

Even if Kerry doesn’t return to the fold, there are a number of other strong contenders for it Prey star Amber Midthunder to play in the Marvel Cinematic Universe in the future. Some fancasts are calling for Midthunder to bring Wolverine’s daughter X-23 to life in the franchise, while others have expressed interest in seeing her play Risque after SWORD’s introduction to the MCU with WandaVision or the Skrull Lyja, who was part of the Secret Invasion comic strip and kept ties to The Fantastic Four, both of which are in the works for the franchise’s foreseeable future. As audiences continue to debate who could play them in the MCU, they can revisit Midthunder’s critically acclaimed work as Naru with Prey streaming on Hulu now.

Next: Every Upcoming Marvel Cinematic Universe Movie and TV Show in DevelopmentSource: Variety