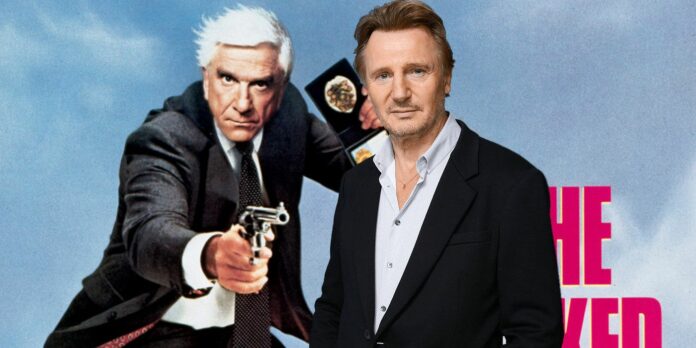 A Naked Gun reboot starring iconic action actor Liam Neeson is in the works at Paramount Studios after three decades with no additions to the series.

a new naked gun movie starring Liam Neeson is in the works at Paramount Studios. Neeson is known for his fantastic performances in action and drama films, starring as Qui-Gon Jinn in Star Wars: The Phantom Menace and Ra’s al Ghul in Batman Begins and The Dark Knight rises. He has been nominated for one Academy Award and two Tony Awards. The next movie in which he plays the lead will be this winter Marlowe as the title character.

The Naked Gun comedy franchise, also known as Police squad!, features a television show and three films that follow Detective Frank Drebin, played by Leslie Nielsen, as he tackles comedic mysteries while dealing with wacky pranks. Despite having less than average brains, Detective Frank won over the audience with his big heart and has been regarded as a comedy icon since the release of the first film. The naked gun movies are notable for faking detective and crime movies, making for a series that ridicules the clichés of this genre. The last movie to be released was Naked Gun 33 1/3: The Final Insult which premiered in 1994, nearly three decades ago, although a reboot has been rumored for quite some time.

Deadline now reports that a reboot of the classic naked gun movies is in the works at Paramount Studios. The film has yet to be green-lit, but once Neeson closes the film, it should. No plot details have been released, but it has been revealed that Neeson could be playing Detective Frank Drebin’s son instead of taking on the famous role himself.

Despite Nielsen’s incredible performance as Detective Frank, his passing in 2010 prevents the original Drebin from returning to the franchise. However, a naked gun movie starring the right actor as a detective would be great to bring to the screens. If Neeson is considered to play the lead detective character in this new naked gun movie, be it detective Frank’s son or the famous detective himself, it will be interesting to see how he will portray the character. With Neeson’s action and drama acting background, it could be a fun twist for Neeson to take on a role that is supposed to be very comedic by nature.

Since the films were acclaimed by an older generation, an advantage of a naked gun reboot would be that it could appeal to people of all ages. Fans who have grown up with the movie for a long time can bring their kids to see the movie and introduce them to the franchise itself. Just as fans showed up for the new one Star Wars and Jurassic World movies, old fans of naked gun movies would get a reboot if they were made, especially if the plot and casting were well executed. While the hype around these movies may not be as big as multibillion-dollar franchises, Star Warsa naked gun reboot can attract an eager audience to see an updated version of the story they love.

Next: Why Liam Neeson Was Recast As Spielberg’s Abraham Lincoln