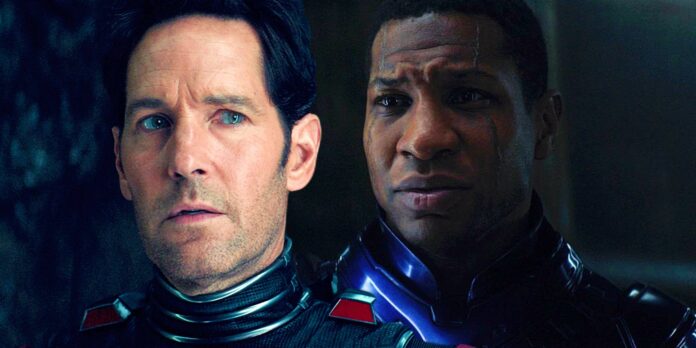 The official Ant-Man and the Wasp: Quantumania trailer is much the same as Marvel’s on SDCC, but a major Kang line has come out.

The first Ant-Man and the Wasp: Quantumania trailer was released by Marvel Studios, but an important line from the San Diego Comic-Con version of the trailer is missing. Three months after Marvel Studios’ Hall H presentation at San Diego Comic-Con, Ant-Man and the Wasp: Quantumania trailer has finally been released to the public. Most of the Ant Man 3 trailer repeats what Marvel had shown on SDCC, with the exception of one line from Kang the Conqueror that references the villain’s history with the Avengers.

In the Ant-Man and the Wasp: Quantumania trailer shown at San Diego Comic-Con 2022, Kang’s exchange with Ant-Man is slightly longer than the one in the official trailer. Before offering Ant-Man some sort of deal, which probably has to do with Scott Lang’s daughter, Cassie Lang, Kang wonders if he’s met Ant-Man yet. More specifically, after Ant-Man introduces himself as an Avenger, Kang seems to remember his own encounters with Earth’s Mightiest Heroes and asks Ant-Man: “Have I killed you before?”.

Why did Marvel cut Kang’s “Have I Killed You Before” line from the Ant-Man 3 trailer?

It’s common for studios to release slightly different versions of trailers previously shown at events like San Diego Comic-Con or other exclusive presentations like D23. Many of the Marvel trailers shown on SDCC or D23 are often never released to the public. Those exclusive materials shown at the big events tend to be more “spoiler-ish” which was the case for Kang’s “Have I killed you before?” line of Ant-Man and the Wasp: Quantumania. Although it’s only a small line, it quickly establishes the power of Kang the Conqueror and his “future history” with the Avengers. It’s also worth noting that the SDCC trailers are made for a specific audience of fans, while the wide release trailer should make sense even for those who have never read a comic book featuring Kang.

Why does Kang think he killed Ant-Man in the past?

In the comics, the lines between past, present and future are very blurry for Kang the Conqueror. Due to his time travel, Kang has the ability to exist in many different times, with the villain playing his cards throughout the history of mankind to conquer the world. As such, the Kang trapped in the Quantum Realm has most likely already fought the Avengers in some version of the future. In fact, the Ant Man 3 Kang may have killed the Avengers in the timeline he’s from, which is why Kang wonders if he killed Ant-Man yet. In essence, the “Have I killed you before?” line summarizes how Kang perceives time.

The line between alternate timelines and alternate universes has also become very blurry in the MCU, but still it’s clear that Avengers: The Kang Dynasty won’t be Kang’s first time fighting the Avengers, at least from his perspective. kangs “Have I killed you before?” tells a lot about the villain and his upcoming clash with the Avengers, and it makes sense that the line is saved for an exclusive event and then for the movie itself. Those familiar with the Marvel comics already know what to expect from Kang in Ant-Man and the Wasp: Quantumaniabut the general public may still be surprised by how Kang fights the Avengers.

Next: Is Ant-Man 3’s Kang The Conqueror The Same As Loki’s He Who Remains?