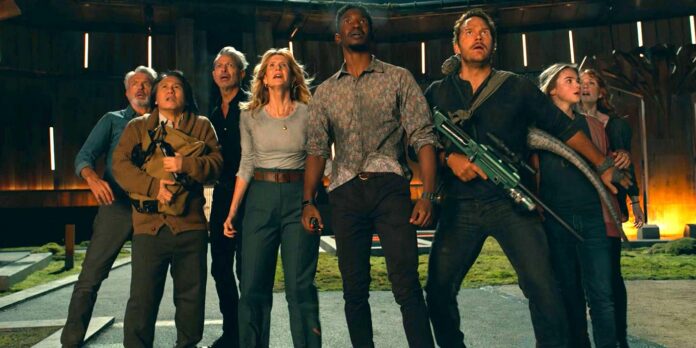 Jurassic World Dominion director Colin Trevorrow says there should have been only one Jurassic Park movie. The dino-powered franchise started in 1993 with Steven Spielberg’s blockbuster Jurassic Park, which was based on Michael Crichton’s novel of the same name. Spielberg returned to direct the 1997 sequel, subtitled The Lost Worldwhich was not nearly as well received by critics and audiences as the original. Jurassic Park IIIwhich was an outlier in the original trilogy in that it was neither directed by Spielberg nor based on a novel by Crichton, was released in 2001 and continued the critical and commercial descent of the franchise.

In 2015, Trevorrow revived the dormant dinosaur franchise to record-breaking blockbuster success with: Jurassic World, which received credit for recapturing the spirit of the original. Trevorrow was soon hired to write and direct Star Wars Episode IX (although he later left the project) handing over the reins to JA Bayona for 2018 Fallen Kingdom which, according to critics and the public, suffered a significant decline in quality. Trevorrow returned to direct Jurassic World Dominion which hit theaters last summer to some of the worst reviews from critics, though audiences seemed to be enjoying the return of the original cast.

Related: Why Jurassic World Dominion Reviews Are So Negative

During a recent interview with EmpireTrevorrow made a surprising confession about the franchise. The Jurassic World Dominion director called Spielberg’s original film “inherently non-franchise“and admittedly,”there should probably only have been one Jurassic Park movieRead Trevorrow’s full comments below:

Check Out:  New Star Wars Movie Could Release In 2025, 6 Years After Rise Of Skywalker

I specifically did something different from the other movies to change the DNA of the franchise. The previous five movies are plots about dinosaurs. This is a story about characters in a world where they coexist with dinosaurs. To move the franchise forward – since it’s inherently not a franchise, there probably should have been only one ‘Jurassic Park’ – but if we’re going to do it, how can I allow them to tell stories in a world where dinosaurs exist, as opposed to, is there another reason why we go to an island?

Should there have been only one Jurassic Park movie?

Trevorrow’s confession is surprising for a few different reasons. First, he has benefited immensely from the Jurassic World reboot trilogy. The 2015 film elevated him from an up-and-coming indie director to a true blockbuster filmmaker, even earning him the chance to work on Star Wars Episode IX. It’s also surprising to hear Trevorrow say that: Jurassic Park is “inherently non-franchise”, which Spielberg himself was working on” The Lost Worldshowing how difficult it can be to create a compelling sequel to a blockbuster hit.

But all this didn’t stop Universal, or Trevorrow himself, from making sequels. Jurassic World however, has successfully recaptured the spirit of the original lordship tried “to change the DNA of the franchiseAs Trevorrow says, and instead of a movie about characters going to an island full of dinosaurs, the sixth movie was about living with dinosaurs on the mainland. lordship still succumbs to the main trap of the sequels, as the characters end up in a remote dinosaur sanctuary anyway. Still, Trevorrow should be commended for trying and his comments should be taken to heart as Universal explores options for continuing the Jurassic Park franchisee.

Next: Jurassic Park & ​​World Movies Are All Blockbusters Despite Bad Reviews