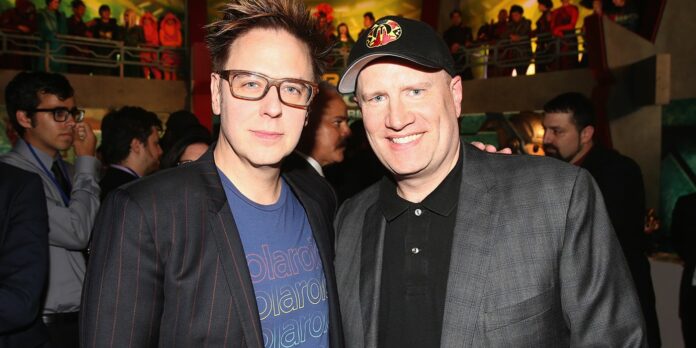 James Gunn shares some insight into his relationship with Kevin Feige. The writer/director became famous for the superhero genre with Guardians of the Universe in 2014 and returned for the 2017 sequel, Guardians of the Galaxy Vol. 2, both huge critical and commercial successes. While developing the threequel, Gunn was fired from Guardians of the Galaxy 3 after some controversial tweets resurfaced. But Marvel later reversed course and reinstated Gunn as director of the third installment.

After being fired from Marvel, Gunn moved to DC to write and direct a passion project about another ragtag team of misfits, The Suicide Squad. Although it was released with less fanfare than expected at the box office, the film was another critical success for Gunn and led to the spin-off peacekeeper series starring John Cena, which found success on HBO Max and was renewed for a second season. Gunn will now stay with DC for the long haul as he was recently tapped to co-head the rebranded DC Studios with Peter Safran.

A few days after the DC deal was announced, James Gunn shares some insight into his relationship with Feige, revealing that the Marvel Studios president was the first person he told about the DC deal (with Cena being the second). Gunn also rejected the widely held belief that there is a rivalry between Marvel and DC. See Gunn’s tweet above.

Marvel isn’t done with Gunn yet

The Guardians of the Universe director giving some insight into his current relationship with the head of Marvel Studios comes shortly after Feige provided a supportive response to Gunn’s new DC role. Now, his recent comments further demonstrate that there is no bad blood between DC Studios’ new co-lead and his former boss at Marvel Studios, even after Gunn’s resignation and gradual transition to DC. This was largely to be expected, given that the working relationship between Gunn and Marvel isn’t quite over yet.

Gunn has the Holiday special Guardians of the Galaxy will be out on Disney+ next month, followed by Guardians of the Galaxy Vol. 3 release in May 2023. The writer/director will likely make the press rounds to promote both projects leading up to their release. With Gunn’s new DC job officially starting November 1, and the two Marvel projects still in the pipeline, he’ll essentially be working for both studios at the same time. However, once they come out, it will mark the end of his tenure at Marvel Studios for at least the next four years, which is how long James Gunn‘s exclusive deal with DC lasts.

Next: James Gunn Is The DCEU Kevin Fiege Is Better Than You Think