Jackass 5 Would Be Different From Previous Movies, Says Johnny Knoxville 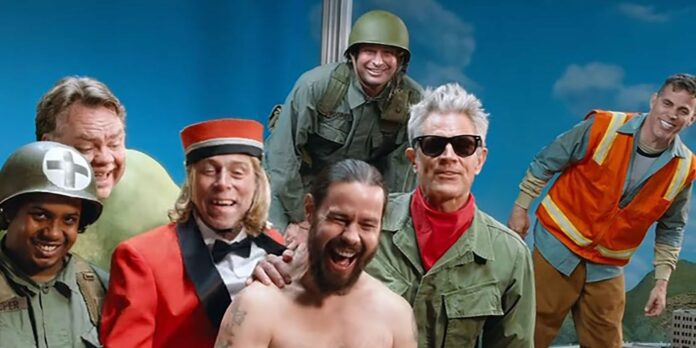 Johnny Knoxville explains how jackass 5 would look slightly different from the previous one jackass movies if they would move on to another episode. Starting as a series on MTV in 2000, Knoxville and his friends returned to the screens for the fourth earlier this year. jackass feature film, Jackass Forever. More than ten years after the release of jackass 3the crowd was delighted to see Steve-O, Chris Pontius, Jason ‘Wee Man’ Acuña, Preston Lacy, Dave England and Ehren McGhehey reunite for another round of ridiculous stunts and hilarious pranks.

In addition to these recurring fan favorites, jackass The gang was joined by a handful of newbies who were inducted into the group through all sorts of wild stunts. Jackass Forever welcomed Sean ‘Poopies’ McInerney, Jasper Dolphin, Eric Manaka, Zach Holmes, Rachel Wolfson and Compston ‘Dark Shark’ Wilson to the beloved franchise, and these new faces have certainly held their own against the veteran, original jackass team. Despite the introduction of these brand new faces, no plans have been announced for jackass 5 at this point, however, Knoxville has now opened up about how a next episode could look different from the previous one jackass movies.

Related: Jackass: Every Injury The Cast Has Suffered (Including on Jackass 4.5)

In conversation with VarietyKnoxville was asked if he could see another jackass movie on the cards in the future, on which the actor confirmed that Jackass Forever wasn’t definitively slated to be the last movie, a lot of people just took it that way. Knoxville then discussed how, if there is a… jackass 5, it would lean more heavily on the new cast, giving the older cast a chance to step back. The star then discussed how a particularly serious injury from Jackass Forever led to his neurologist advising him to take a step back as well. Check out the full quote from Knoxville below.

Check Out:  Was Hocus Pocus 2 Worth the Wait?

We never said whether or not it was [the final film]. That’s written somewhere and people walked away with it. If we kept going, we’d be leaning more on the younger cast and the old guys would step back but still be a part of it. I should take a step back because my neurologist said I shouldn’t have a concussion anymore.

Giving real meaning to the sentence”do not try this at home” Jackass Forever saw Knoxville recreate a stunt he had become somewhat famous for, in which the star essentially takes on a raging bull. Despite having previously escaped with only minor injuries, Jackass ForeverThe stunt’s version caused Knoxville to suffer a brain haemorrhage, which immediately led to a sharp decline in the actor’s cognitive abilities. The haemorrhage was the result of a severe concussion as Knoxville was also in rehab at the time with a broken wrist and broken rib from the intense stunt.

Since Knoxville and the jackass gang first made a name for themselves over 20 years ago, it’s certainly understandable that they now feel the time has come to step back, especially for Knoxville, who suffered such massive injuries as a result of filming . Though that’s not to say the gang won’t participate in some less intense stunts, as ringmaster of the whole jackass circus, it’s safe to say that the days of bullfighting in Knoxville and all of the same caliber are over. For now, fans will likely be relieved to learn that the star is prioritizing his health, and should jackass 5 given the green light, it will be interesting to see what Knoxville has in store for round five.

Next: Why Jackass Forever’s Box Office Performance Is So Good