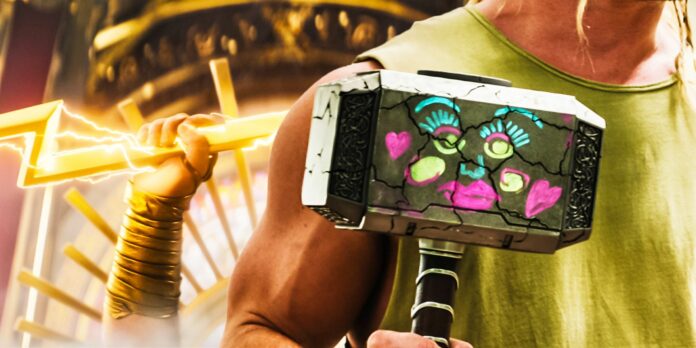 With the events of Thor: Love and Thunder, questions have been raised as to whether the hammer Mjolnir or Zeus’ Thunderbolt is the more powerful weapon. In the movie, when Zeus is introduced, he wields the huge Thunderbolt that generates lightning to throw at will. It’s so powerful that after a showdown between him and Thor in Omnipotence City, the god is seemingly punched through the chest with Thunderbolt. Thunderbolt is certainly a powerful weapon in the possession of the mightiest gods, but how it matches up with Mjolnir is a question that remains to be answered.

Zeus’ Thunderbolt is still relatively new to the MCU, but it can be inferred that it operates in a similar capacity to Mjolnir. Like the hammer, it can channel electrical current, in this case the electrical energy of Zeus himself. Mjolnir, on the other hand, can summon and channel lightning through it. Both weapons can be used for flying, although Mjolnir requires the wearer to spin it in continuous rotation (like a propeller) with tremendous force before it can lift them off the ground. Mjolnir, unique to Thor and the Mighty Thor, can return to them if they just reach for it. Zeus’ Thunderbolt also returns to him, or whoever can hold him at will.

Is Zeus more powerful than Thor in the MCU? What about Hercules?

When it comes to which weapon is more powerful, it’s probably Zeus’ Thunderbolt over Mjolnir. There’s still a lot to learn about Thunderbolt in the MCU, but only from Thor: Love and Thunder, it can do at least as much as Mjolnir and Stormbreaker, two of the most powerful weapons the universe has to offer. In love and thunder, Thor sought Thunderbolt’s help to help him deal with Gorr the God Butcher. Thor believed it was capable of defeating Gorr, while he did not believe that Mjolnir could. He knew he needed more strength than Mjolnir and Stormbreaker could do alone or even together.

Since Zeus is the most powerful god in the MCU, it would make sense that he would wield the most powerful god weapon. This would arguably make him stronger than Thor and his weapons; he is, after all, the Greek equivalent of Odin. In addition, little is known at this point as to whether Hercules, also known as the God of Strength, is more powerful than Thor, as he is only briefly in the Thor: Love and Thunder mid credit scene. However, the fact that Zeus ordered him to kill Thor means that Zeus believes Hercules can defeat him. He will more than likely be a formidable opponent for Thor and the other Avengers in future movies.

What is the most powerful weapon in the MCU (so far)?

Despite Thunderbolt being a stronger weapon than Mjolnir, and even Stormbreaker, the Infinity Gauntlet is still the most powerful weapon in the MCU, at least when powered by the Infinity Stones. The Infinity Stones in their own right are some of the most powerful artifacts in the universe. Individually, the stone worlds can change with little to no effort. However, as a combined unit they are unmatched. The wielder can literally do whatever they want with the universe at will. The fact that Thanos took out almost all Uru dwarves after forcing them to create the gauntlet, fought heroes on multiple planets to collect the stones, and Thanos could simply snap his fingers to kill half of all living things in the universe wiping out means there is no alternative weapon capable of such a power, or Thanos would probably have found it. So far there is no weapon with the power of the Infinity Gauntlet, Thor: Love and Thunder‘s Mjolnir and Thunderbolt included.

Next: Love & Thunder did in 2 minutes what 2 entire Thor movies failed