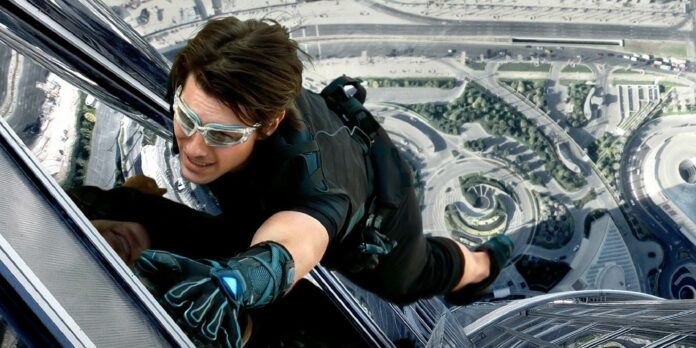 Mission: Impossible – Dead Reckoning Part One Director Christopher McQuarrie has revealed that he and star Tom Cruise are developing a brand new groundbreaking stunt. The pair first worked together on 2008’s Valkyrie, which was co-written by McQuarrie. The next time they worked together was a small overlap three years later, when McQuarrie did script revisions on the fifth Mission Impossible movie, Mission: Impossible – Ghost Protocol. As small as this collaboration was, this collaboration came at the perfect time for both creators, as it was during the period when Cruise developed his taste for performing lifelike, incredibly dangerous stunts in front of the camera.

Ghost protocol is the movie in which Cruise performed the famous stunt where he ran along the side of the Burj Khalifa in Dubai. Although they have worked together on Jack Reacher and Edge of tomorrow in the meantime, their most fruitful collaboration to date turned out to be 2015 Mission: Impossible – Rogue Nation, which McQuarrie directed. That film featured Cruise clinging to the side of a plane in mid-air, a death-defying act that urged both creators to go even further with each subsequent project, including Mission: Impossible – Falloutthe mega hit of 2021 Top Gun: Maverickand continue the next few Mission: Impossible – Dead Reckoning Part One and Part two.

Today on his official Twitter account, McQuarrie responded to a question from fans about his collaborations with Tom Cruise. The fan, whose screen name is Amanda Hunt, asked if there are any stunts he and Tom Cruise would like to do, but which turned out to be impossible. The Top Gun: Maverick The writer’s intriguing response was to share a story from the past week saying that “On Friday morning I told Tom that the technology to film a specific stunt simply didn’t exist,” further to say that thanks to their skilled team, “it was six o’clock.Watch the original Tweet below:

In which movie could this new Tom Cruise stunt appear?

While this Tweet is sure to pique the interest of Cruise fans, a frustrating element is the fact that McQuarrie hasn’t revealed exactly which movie the stunt he’s describing will appear in. Unless his Tweet is misleading and he refers to a Friday that happened a long time ago, it seems unlikely it will appear in either Dead Reckoning part one or Twobecause the main photos will be wrapped on those films in September 2021. While it’s possible the stunt is part of a new shoot, it seems more likely it will be part of an upcoming movie they’re both working on.

Unfortunately, that doesn’t necessarily limit things. Cruise and the Mission: Impossible – Dead Reckoning Part One director is currently collaborating on at least four upcoming films, including a new action franchise, a musical, and a new collaboration with the director of tropical thunder. While all are in development, they are actively in production for a collaboration with SpaceX that will be filmed in space. Given how intense the technological requirements for that film would be, it seems very likely that this is the project McQuarrie referred to in his Tweet.