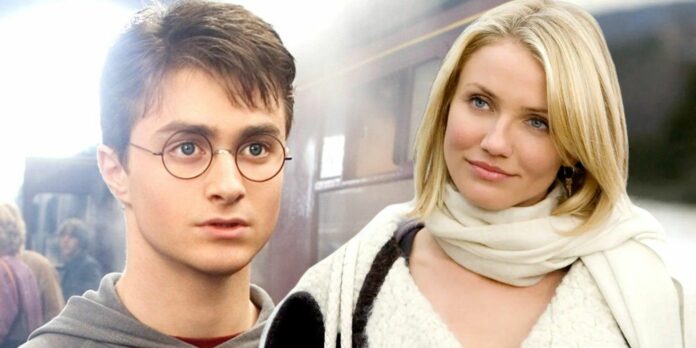 Harry Potter star Tom Felton reveals that his co-star Daniel Radcliffe used a photo of Cameron Diaz to assist him during flight scenes. Both best known for their breakout roles in the Harry Potter movies, Felton and Radcliffe starred as Draco Malfoy and Harry Potter respectively. As they both grew up with the franchise, the two actors have made a big impact on pop culture due to their highly memorable performances as audiences continue to celebrate the much-loved film series more than 10 years after the last film’s release, Harry Potter and the Deathly Hallows Part 2.

With the two characters hitting the screen more than a few times in each of the eight Harry Potter movies, the couple’s relationship couldn’t have been more different off-screen, with both Felton and Radcliffe expressing an interest in working together again in the future. Both were about 11-12 years old while filming the first movie, Harry Potter and the Philosopher’s Stone, the pair have recalled numerous stories over the years of their various on-set hijinks, often involving some older cast members, including the late Alan Rickman. With the films that pushed these young actors in the deep end when it came to creating the fantasy epic that the Harry Potter franchise, Felton has now revealed the hilarious way Daniel Radcliffe filmed flying scenes.

Felton is currently celebrating the recent release of his highly anticipated memoir Beyond the Wand: The Magic and Chaos of Growing Up as a Wizard (through Variety) in which he has shared a handful of brilliant stories from his time on set. One particular story comes at the expense of Radcliffe, as Felton shares that his opponent would use a photo of Diaz to help him achieve his goal while filming Quidditch and other flying scenes. Radcliffe recalls how tennis balls were sometimes used to simulate the placement of various obstacles, and chose a photo of the Charlie’s Angels star to help him during these tricky scenes. Check out Felton’s full quote below.

When the first deputy director called ‘Dragon!’ shouted or ‘Bludger!’ you had to look at the tennis ball as if it were, well, a dragon or a buckler. Sometimes there was more than one tennis ball up there, and because one was very similar to the other, after a while they gave us more individual objects to stare at. We chose photos of something or someone close to our hearts. Daniel Radcliffe had a photo of a particularly beautiful Cameron Diaz.

While each of the Harry Potter movies contain some impressive shots and ambitious scenes, the Quidditch scenes were said to be some of the more complex to shoot. After a meticulous planning phase with hand-drawn storyboards, the scene would then be pre-visualized using CGI. Each character involved in the scene was filmed separately, with the tennis balls and Diaz photo coming into play at this stage, implementing elements such as light and wind effects to simulate the rapid movement of a broom.

While Diaz was sadly not credited for her involvement in the… Harry Potter movies, all the hard work of the cast and crew definitely paid off. Plus, these scenes are now probably even more fun for the audience after this brilliant reveal. This story, along with the countless other sweet anecdotes Felton has shared over the years, continue to prove that the magic both on screen and off was definitely there when it came to making the Harry Potter movies, because Felton is certainly not the only one sharing memories of the fun moments they had while filming.

Source: Beyond the Wand: The Magic and Mayhem of Growing Up a Wizard (via Variety)

Next: What The Harry Potter Cast Has Been Up To Since The Movies Ended