Guillermo del Toro Explains Why His Pinocchio Film Is Stop-Motion 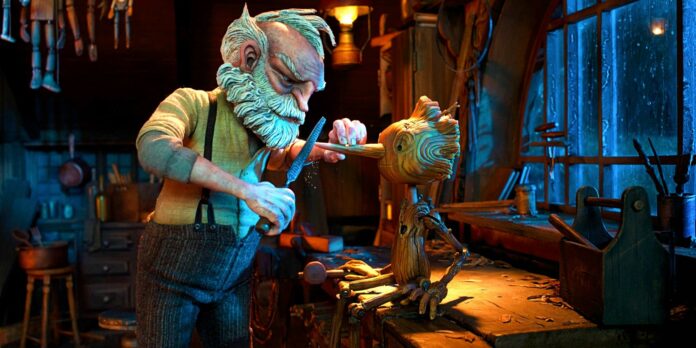 Guillermo Del Toro has revealed why his upcoming Pinocchio film was supposed to be a Stop-Motion project. Based on the Italian children’s novel from 1883 The Adventures of Pinocchio, by author Carlo Collodi, Del Toro made some creative changes to the story, which is now set in Mussolini-led Fascist Italy of the 1930s. The film, which focuses on the mischievous titular doll as he navigates the world, will hit theaters in November before hitting streaming services in December, and is a darker take on the story compared to the well-known Disney film from 1940, which also recently had a remake. Disney’s Pinocchio live-action received negative reviews, while Del Toro’s version is still expected to be a huge success due to its differences from the other versions, as well as the creator’s history of beautiful surreal stories.

From the writer-director known for Pan’s labyrinth, the shape of water, and nightmare alleyDel Toros Pinocchio is supported by an amazing cast of famous voices. Ewan McGregor, Ron Perlman, Finn Wolfhard, Cate Blanchett, Christoph Waltz and Tilda Swinton are all set to star, with David Bradley as the woodcarver Geppetto. A major difference in this version of the story is the addition of Geppetto’s late son Carlo, who died tragically a few years before the doll maker made Pinocchio. Del Toro has noted in previous interviews that the wooden doll is made from the tree that sprouts at Carlo’s grave, so when Geppetto begs for the chance to become a father again, Pinocchio is given the gift of life. He went on to explain that Geppetto’s biggest conflict is that he just wanted his good son back, not this wild, rambunctious doll who won’t listen.

While chatting with IndieWireDel Toro explained why his new version of this beloved story had to be Stop-Motion, because it was the perfect format to tell it in. After more than 15 years working on this passion project, the process of which in previous promotional images seems to be the main reason for choosing Stop-Motion, he believes that the “perfectly imperfect” process of this type of animation makes the movie more realistic than the smooth animation styles used today. Puppets are made with mistakes, and Del Toro did the same while telling this story. He went on to comment:

“Everyone is a puppet. Being animated makes Pinocchio’s existence completely natural as you tell the story. I’m surprised, glad, that it hasn’t been dealt with this way before. It’s so natural in the story.”

Beauty in ephemerality is an adequate theme of puppetry, they tend to break, miss the realism of a human and make a few attempts to perfect. By building these quirks into the animation style used in Pinocchio, Del Toro has found a new way to portray these messages in the film, not just in reference to the wooden child who wants to be a real boy. Adding his unique touch to the project, as teased in trailers showing a strange world, Del Toro has once again captured the magnificence of the flawed, something that is a guiding premise in his filmography.

The story of Pinocchio calls for a handmade feel, with Stop-Motion being the perfect solution for this. The long hours spent moving the figures step by step have made this film a true labor of love, and a highly anticipated release. This project hasn’t always had a bright future, at one point it was reported that production was shutting down completely, with Del Toro confirming it was no longer going ahead. Fortunately, this was short-lived, the success of the director’s work, including his Oscar winnings for The shape of water has made him an incredibly attractive talent to have in any movie, the hype for Pinocchio is no longer felt only by the die-hard Del Toro fans, but by those who have seen its more global hits.