Every New Cenobite Introduced In Hellraiser 2022 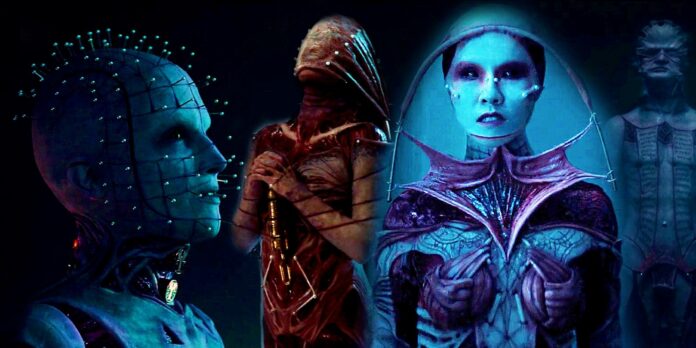 Warning! This article contains spoilers for Hulu’s Hellraiser!The latest iconic slasher movie to reboot, David Bruckner’s Hellraiser brought the franchise into a modern era, along with some new Cenobites. The demonic purveyors of pain and torment, the Cenobites were introduced in Clive Barkers’ original masterpiece, Hellraiser, and are a fixture in the movies. Now that the movie is available to watch on Hulu, here’s a look at the new demons that have been introduced.

The Cenobites have returned to show mortals the apparent pleasure of brutal torture, following in the footsteps of their enigmatic leader Pinhead, aka the High Priestess. In addition to an updated look, Pinhead is now canonically feminine. She returns along with the harrowing Chatterer, whose only recognizable facial features are his incessantly clicking teeth sticking out of his face beneath a mass of warped and stretched skin. Both have been given an updated design in the Hellraiser reboot, Bruckner decides to ditch the original Hellraiser‘s black leather in favor of an anatomical structure. Like the movie itself, the new Cenobites strike the perfect balance between honoring and elevating the original.

RELATED: Hulu’s Hellraiser Borrows The Best Idea From The Friday The 13th’s Remake

The Gasp is Pinhead’s right-hand man. Her appearance is an amalgamation of two previous Cenobites, Deep Throat (Hellraiser, Hell bound: Hell raiser II) and Angelique (Hellraiser: Bloodline). Both iconic Cenobites were popular in the original franchise, making The Gasp a fitting tribute. The Gasp features Deep Throat’s nose piercing and cut open neck, which is held in place by surgical pins and greatly impairs her breathing. The Gasp’s scalp is stretched down and hooked to her shoulders and throat in a way reminiscent of Angelique’s torn scalp. The Gasp can control wires that appear out of nowhere to ensnare victims, like Pinhead’s infamous chains. The Gasp is undoubtedly one of the more disturbing new characters of the 2022s Hellraiser.

One of the more visually gruesome new Cenobites, The Weeper is next most prominent. Her deep blue skin and large black eyes, endlessly wet with black tears, give her an otherworldly appearance, her inhuman face countered by her terrifying sobs. Ribbons of her flesh have been removed and wound on spools attached to her skin and part of her lower lip and chin is missing, exposing the flesh beneath. The Weeper has the ability to split her arms open, to create a second pair held together by surgical pins. The Weeper is truly one of the most disturbing additions to the new Cenobites, as led by Hellraiser‘s new Pinhead.

The Asphyx is smothered by the skin of its own skinned body, wrapped and twisted over its face. The skin is pinned in place along a series of nerves and muscles, stripped of its flesh to reveal its heaving chest as it struggles to breathe against its own deformed skin. The Asphyx is initially bound with wires that hold its hands in a prayer position via a mechanism attached to the front and back, which, like its fellow Cenobites, is largely stripped of its skin. Calm in demeanor at first, conjuring images of religious ceremony, once The Asphyx’s hands are detached the threat becomes much more immediate.

The Masque is very reminiscent of the most memorable death in the original HellraiserFrank’s during the infamous “Jesus Wept” scene. His face is outstretched and over a surgical wire encircling his head. Its white, pale flesh has been dissected and presented as a medical specimen. Two strips of skin on his chest contain passages of text that continue the themes of the ancient religion that are prominent in Hell raiser. Wires and pins hold most of his body in place, making the medical anatomical design of Bruckner’s Cenobites truly home to as it resembles an antique surgical illustration.

Only a brief glimpse of the Mother can be seen, but she promises to be a really disturbing Cenobite in future episodes, which will hopefully be more successful than the last. Hellraiser prosecute. The mother’s body is dissected to reveal and highlight her troubling pregnancy. While gently holding her heavy belly, The Mother recalls the infamous crying baby from… Hellbound: Hellraiser II, which also exploited and undermined the maternal instinct. The look of the mother is draped in the trademark Hellraiser blue tinted lighting, which, when bathed on her headscarf, is very reminiscent of the Christian Mary, bringing the maternal theme together with the religious. An illustration of The Mother is visible on the wall of Voight’s office, alongside images of The Gasp and The Weeper.

RELATED: The Hellraiser reboot could save the franchise from its popularity problem

As Voight is introduced in Hellraiser as a human, he’s the only Cenobite whose backstory we know of (assuming Doug Bradley’s Pinhead backstory is no longer canon). After opening the Lament Configuration, Voight is offered the power of the Cenobites, after which he is tortured until he transforms into a new Cenobite. His mouth has been ripped open and peeled back, exposing his teeth as The Chatterer, while his leftover flesh is sliced ​​and pinned in place, giving Voight the appearance of a dressmaker’s mannequin. The final scene revealing Voight’s transformation in Hellraiseris the film’s main hint of a possible sequel, it also centers on the pseudo-Christian themes, garbled Voight with the sound of angelic, heavenly choral singing as he bathes in the blinding white light.

Hellraiser has managed to expand its knowledge and legacy while maintaining the tone of the original. These new Cenobites honor both previous demons from the franchise and the new, more medical design. They also manage to recapture the beauty of the Ordinal Cenobites, who, despite their graphical deformities, still embody elegance and artistry. Hellraiser is now available to stream on Hulu.

NEXT: All 6 Configurations of Hellraiser 2022’s Puzzle Box Explained