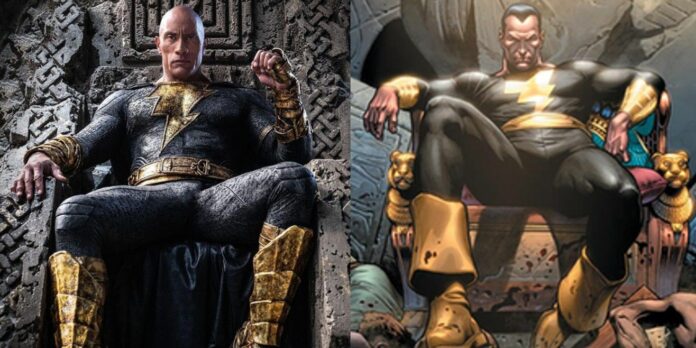 Dwayne Johnson recreated and iconic Black Adam comic cover in new photo. The upcoming highly anticipated DC Extended Universe movie marks the superhero debut of Johnson, who has been playing the titular antihero since 2014. Johnson was originally supposed to appear as a villain in Shazam!but his character was later turned into a solo film. Black Adam will find Johnson’s vengeful warrior as he unleashes his wrath on the modern world, drawing the attention of the Justice Society of America (JSA) and its members, Aldis Hodge’s Hawkman, Noah Centineo’s Atom Smasher, Quintessa Swindell’s Cyclone, and Pierce Brosnan’s Doctor Fate, while they try to negotiate peace with Black Adam.

With a few weeks left until release, the marketing campaign for Black Adam stays pretty solid. There’s no doubt that Johnson’s attachment to the film will prove to be one of its key success factors, but other than that, the trailers for Black Adam, which have been described by critics as action-packed sizzle reels, have impressed the general public. Recently, an epic aerial shot showed the teaser for Black Adam screened from the roof of LA Rams’ SoFi Stadium in Inglewood, California, the film has once again made waves with a new marketing gimmick.

Black Adam producer Hiram Garcia shared a new promotional image for Black Adam on Instagram, where Johnson recreates the iconic comic book cover for 52’s Volume 1, No. 45, “Every Hour Wounds, the Last Kills.” The new photo, like the comic book cover, finds Johnson’s antihero high and mighty on his throne, with Kahndaq’s ancient Egyptian architecture as the backdrop. Check out Garcia’s post above:

In any case, the new image is a subtle nod to Black Adam‘s source material. At the moment it is not clear how close will be Black Adam listen to the comics. His backstory, brutality and romance with Adrianna will all ostensibly be honored in the new film, although there appear to be some changes, such as Black Adam and Hawkman not remembering their association from 5,000 years ago in Kahndaq. Black Adam also seems to lean more towards the titular warrior’s antihero persona rather than his supervillain alter-ego, all of which was explored in New 52though Collet-Serra took a lot straight from the other comic series, including Kahndaq’s infrastructure, the JSA superheroes’ costumes, their weapons, and even their Thanagarian Star Cruiser.

Given the massive restructuring that the DCEU is currently undergoing, it is practically not convenient for Black Adam to completely customize the comic strip lines. Still, the writers and producers seem to have done their best to honor the source material, spreading references and Easter eggs to the larger DCEU in the film. This was noticed in the final Black Adam trailer, including images of Justice League and Birds of prey, and with most of the superheroes in the movie having the same skills as in the comics, or updated to add more depth to the characterization, it seems well positioned to please avid franchise fans and new audiences alike. Only time will tell how the film resonates with viewers when Birds of prey opens in theaters October 21.