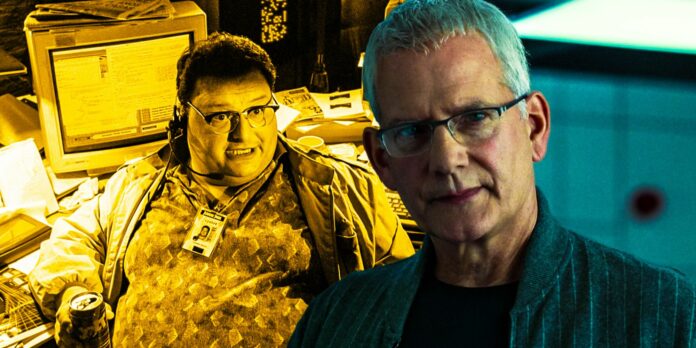 Dodgson hired Nedry to steal the DNA samples from Jurassic Park, and Nedry was eventually killed by a dilophosaurus. Dodgson dies the same way in JWD.

The gruesome death of Dr. Lewis Dodgeson in Jurassic World Dominion seems to reflect another key death scene from the first movie of the series 29 years earlier. Jurassic World Dominion, released in 2022, sets Dodgson as his main antagonist as the character is now revealed as the CEO of Biosyn. As CEO, Dodgson lets his chief scientist, Dr. Wu, create prehistoric locusts that can destroy food crops not owned by Biosyn. This isn’t the first time in the series that the scientist has resorted to trickery to get ahead.

In the 1993 movie Jurassic ParkDodgson bribes InGen computer programmer Dennis Nedry to steal dinosaur embryos. Dodgson works for Biosyn, a genetics company that competes with InGen, and believes stealing these embryos will give his company a competitive advantage. Nedry feels like he’s not getting enough money for the work he does at InGen, which is why he’s so quick to take Dodgson’s bribes and go through with his plan. The two men initially meet outside a shopping center where Dodgson gives Nedry half the money, as well as a Barbasol can modified to hide the stolen embryos. To obtain the embryos, Nedry deactivates Jurassic Park’s security, allowing many of the dinosaurs to roam freely through the park.

Nedry meets his brutal demise while trying to escape with the stolen embryos. Disoriented by the weather, he crashes his jeep into a forest, where he is eventually killed by a Dilophosaurus that sprays him with poison. Nedry’s death sequence is eerily similar to Dodgson’s final moments in Jurassic World Dominion. When Alan Grant and Ellie Sattler discover the locusts in the 2022 film, Dodgson tries to burn all the evidence to avoid arrest, causing the sanctuary to catch fire and the insects to escape. While trying to flee, Dodgson is surrounded by a group of Dilophosaurs and meets the same poisonous fate as Nedry. Dodgson’s death is a complete moment for the character’s relationship with Nedry. These characters are similar in their awkward personalities, their desires, and their final moments. Dodgson dies the same way Nedry did, serving as karma for his initial involvement in what led to Nedry’s death.

The meaning behind Dodgson’s death

Nedry and Dodgson as characters share many similarities, other than just their eventual demise. They are both portrayed as greedy and morally corrupt men, whose judgment becomes clouded when opportunities for potential wealth and power are presented. Nedry, dissatisfied with the amount of money he makes at InGen, agrees to help Dodgson with his plan because of the large amount of money promised to him if he helps. In Jurassic World DominionDodgson uses the locusts to ensure that his business succeeds solely at the expense of others. It is their greed that led both men to their brutal deaths.

The two men’s fates are also linked by the modified Barbasol can, the tool Nedry gave to Dodgson to help him steal the dinosaur embryos. When Nedry is attacked in Jurassic Park, he drops the can and the movie never shows if it makes it to Dodgson. The Barbasol can is later displayed on Dodgson’s trophy shelf in Jurassic World Dominion. After his plan is thwarted, he grabs the can before running towards it, again referring to the can of embryos. Like Nedry, Dodgson drops the Barbasol bus while being attacked by the group of Dilophosaurus. Although Dodgson and Nedry have a limited time together on screen, these characters are linked throughout the series by their loose morals and their selfish desire for money and power. Their nearly identical death scenes in Jurassic Park and Jurassic World Dominion strengthen this connection and seem to complete their story.

Next: Dominion is so bad it can’t possibly end the Jurassic franchise