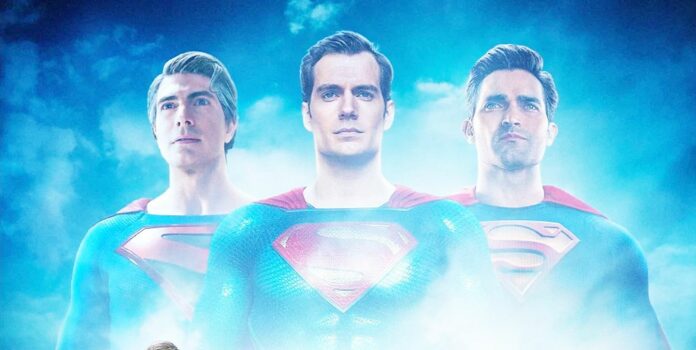 An awesome Multiverse fan poster features the Arrowverse and the DCEU’s respective versions of Superman teaming up in an epic crossover event.

The arrowverse and the DCEUs respective versions of Superman team up in an epic Multiverse fan poster. One of the DC Comics heroes most portrayed in live-action is Superman, who has appeared in countless TV shows and movies over the years. When it comes to the big screen, Henry Cavill is currently the DCEU’s Superman as he returned to the interconnected franchise in Black Adam for a special cameo. After the film’s release, Cavill confirmed that this is just the beginning of his new Superman chapter.

Although Warner Bros. Discovery may not have any plans to bring together current versions of Supermen, a talented fan artist, who posts under the handle Art of time travel, pitches the perfect Multiverse crossover. The designer shared a beautiful Arrowverse/DCEU poster on Instagram featuring Cavill and Hoechlin’s respective versions of Superman alongside Brandon Routh’s incarnation, which is also intended to be Christopher Reeve’s take on the DC icon. View the poster below:

A Superman Crossover Is Really Possible Thanks To Arrowverse’s Crisis

While the DCEU and the Arrowverse tend to stand alone as franchises, the door is actually open to a potential Superman crossover. Between December 2019 and January 2020, The CW did its own take on Crisis on Infinite Earths, which was a huge game-changer for the Arrowverse. During the multi-part event, the DCEU and the Arrowverse crossed paths as Grant Gustin and Ezra Miller’s respective versions of The Flash shared the screen for the very first time. Not only did it become one of the biggest moments in the entire crossover, but it broke a barrier that now allows the Arrowverse and the DCEU to do similar crossovers, which a three-time team of Superman actors could easily do. to shape.

With multiple versions of Superman currently in live-action, a crossover with a group of them would be huge for DC media as a whole. Even though the Multiverse has been a major factor for the DCEU in recent years, which will continue to bear fruit in the future The flash movie, time will tell if that concept will be part of DC Studios, which launches November 1. Hopefully there will be a DC project where the great guys of the arrowverse and DCEU somehow join forces.

MORE: Man Of Steel 2 Has To Revisit The Best Scene From The First (Which The DCEU Forgot)

Check Out:  James Gunn Celebrates First Day As DC Studios Boss With Superman Comic
Share
Facebook
Twitter
Pinterest
WhatsApp
Previous articleHugh Jackman Has Funny Reason Why Deadpool 3 Should Be Retitled
Next articleHenry Cavill Teases A Bright Future For His Superman In The DCU