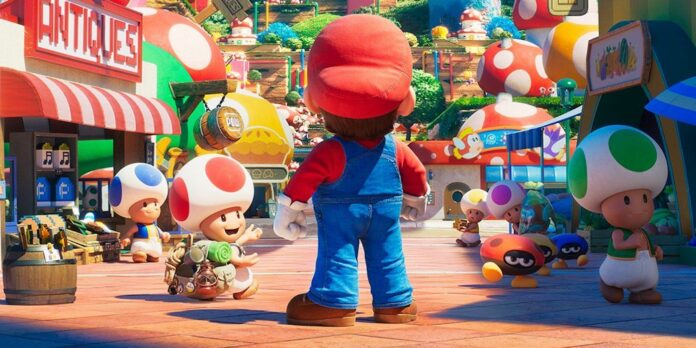 Chris Pratt hypes the new one Super Mario Bros. movie after the release of the poster. The famed video game plumber first appeared as Jumpman in 1981 with the release of the arcade classic Donkey Kong. After this, he was renamed Mario and went on to star in the ever-popular Super Mario Bros. series of video games. The character became known for his versatile appearances as he would go from mushroom kingdom hero to kart driver to tennis player and to Olympic medalist between games. The one thing Mario hasn’t mastered, a problem most video game franchises face, are feature films.

Hollywood Pictures released a movie version of Super Mario Bros. in 1993 starring Bob Hoskins, John Leguizamo and Dennis Hopper where it bombed at the box office and received negative reviews, including from the cast. This left Nintendo hesitant about further film adaptations of their video game franchises. Years later, Nintendo re-entered the cinema world by teaming up with Illumination to produce an animated feature film adaptation of the beloved character and casting Chris Pratt to give him a voice in a somewhat divisive decision.

In preparation for the release, Pratt has expressed his enthusiasm for the film. He took om Twitter comment on the poster and hype the public for the trailer with the message, “This one is VERY special. I can not wait!!! Get ready to be blown away!followed by a reminder to watch the October 6, 2022 Nintendo Direct to see the new trailer. Check out the Tweet above.

Check Out:  The Oregon Trail Video Game Is Being Developed As A Movie Musical

Can Pratt’s Mario performance win over a skeptical fan base?

After the announcement that Pratt would be cast as the character, the internet became divided, with some finding the casting unique and original, while others found it controversial. The negative reception from people mainly stems from those who believe that Pratt was simply misplaced for the role. Others found it odd that they prefer Pratt over Mario’s original voice Charles Martinet, despite the fact that he will have several cameos in the film. Some fans even went so far as to attack Pratt’s personal and misinformed aspects of his life, prompting other filmmakers like James Gunn to defend him. Pratt is not without his supporters, as some viewers are patient enough to wait and see what Pratt’s performance will be like.

It took years for video games to receive positive reactions to film adaptations. Movies like Detective Pikachu and Sonic the hedgehog have shown that it is possible to take these characters and tell compelling stories. Pratt’s portrayal of Mario, while odd, is no different from Ryan Reynolds as Pikachu or Ben Schwartz as Sonic. The public has yet to hear what Pratt’s portrayal of the character would look like, although he has stated that he will use a different voice than the one he naturally uses. Nevertheless, it cannot be denied that the Super Mario Bros. movie will have a significant amount of hype leading up to its release.