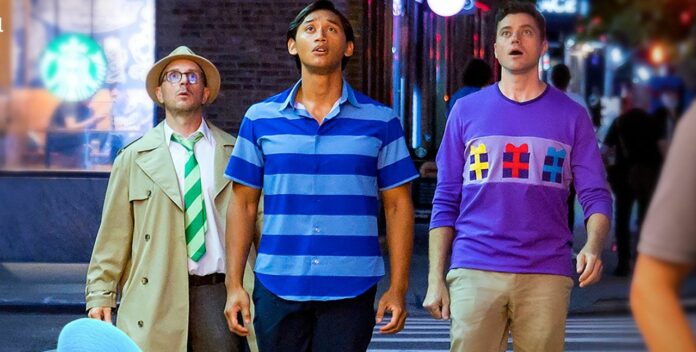 Paramount+’s new trailer for Blue’s Big City Adventure reunites former hosts, Steve and Joe, as they try to solve their biggest mystery yet.

A new trailer for Paramount+’s Blue’s Big City Adventure reveals that beloved former hosts Steve and Joe have returned to search for clues and locate Josh and Blue, who are lost in New York City. Blue’s Clues is an educational children’s show that follows Steve and his dog Blue as they leave paw prints on objects throughout the house as clues. By breaking through the fourth wall, Steve engages the audience by asking for their help in figuring out what Blue is trying to say to solve the mystery of the day. Blue’s Clues first aired on Nickelodeon as part of the Nick Jr. programming block in 1996.

Blue’s Clues quickly became a popular show for preschool-aged children due to its interactive nature, which was revolutionary at the time. The format encouraged children to participate directly in the show, helping them develop their understanding and problem-solving skills, fostering positive reception from parents. Blue itself became a cultural icon on par with contemporaries such as Barney and Arthurleading to millions of dollars in merchandising sales, solidifying Blue’s Clues as one of Nickelodeon’s highest-grossing shows. During the show’s initial run, two separate actors took on the roles of the host, Steve (Steve Burns) from 1996 to 2002 and Joe (Donovan Patton) from 2002 to 2006. A reboot of the series, Blue’s Clues & you! premiered on Nickelodeon in 2019, with Broadway actor Josh Dela Cruz taking on the lead role.

Related: PAW Patrol 2 News and Updates: Everything We Know

In the trailer for Blue’s Big City Adventure, former hosts Steve and Joe come to the aid of Josh and Blue who are lost in New York City. After Josh loses his handy notebook, Mr. Salt, Mrs. Pepper and the gang travel to the big city to enlist Steve and Joe’s help in finding their friends. As they sing and dance through the Big Apple, they are reminded of the show’s iconic catchphrase, “You can do something, that you want to do.” Watch the full trailer below:

All three hosts return for this great adventure

Blue’s Big City Adventure gives fans young and old the chance to see all their favorite clue-solving hosts in one epic adventure. Burns and Patton remained involved with the franchise after their departure, both writing and directing episodes Blue’s Clues & you! Both actors are also recurring cast members, reprising the characters of Steve and Joe during the reboot. While fans who grew up watching Blue’s Clues may be obsolete, many of them now have pre-school children of their own. This film offers a nostalgic and fun adventure for the whole family.

Paramount previously had an animated Blue’s Clues movie was in the works to celebrate the franchise’s 25th anniversary. The franchise’s longevity is a testament to how effective the show is both educationally and culturally. Junior detectives can help find clues when: Blue’s Big City Adventure premieres on Paramount+ on November 18.