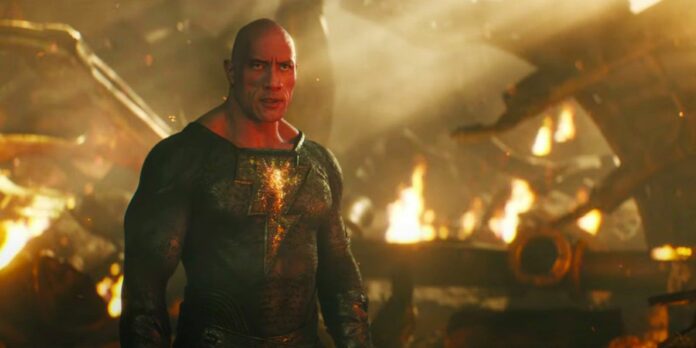 The Black Adam post-credits scene has been leaked online, sparking a massive outcry and sending several social media sites to remove the content.

The Black Adam post-credits scene with a key reveal leaked, causing chaos online. The final entry into the DC Extended Universe, Black Adam finally introduces Dwayne “The Rock” Johnson as the DC antihero and provides an origin story for the titular character who, after five thousand years in prison, is released into modern times and clashes with the Justice Society of America. The JSA characters introduced are Aldis Hodge as Hawkman, Noah Centineo as Atom Smasher, Quintessa Swindell as Cyclone, and Pierce Brosnan as Doctor Fate.

The DCEU movie recently had its world premiere, and the first Black Adam early reactions are making their way online with critics claiming that The Rock is electric in the lead role. Johnson’s debut has been many years in the making, and the actor has long said his arrival as the DC antihero will change the franchise’s power structure. He has also continually teased the ties between Black Adam and the wider DCEU, which includes Superman and the Justice League. Black Adam doesn’t hit theaters until a week later, so audiences will have to wait and see what surprises it holds. However, it appears that an important revelation has been leaked online.

Related: New Black Adam Trailer Proves The Rock Was Right: It Will Change The DCEU

After the world premiere, Black Adam‘s post-credits scene started to make its way online. The scene contains a big reveal, which will not be spoiled here. Variety reports that several social media platforms, including Twitter and TikTok, are removing posts containing images of the Black Adam post-credits scene as they qualify as copyright infringement, which violates their guidelines.

Why leaks are so frustrating for DC and Marvel fans

Unfortunately, these types of leaks are too common. The Black Adam situation is very reminiscent of when the contents of the Eternals post-credits scene leaked last year. Shortly after the world premiere of the Marvel movie, the fact that Harry Styles had been cast as Eros came online almost immediately. These kinds of leaks can be incredibly frustrating for DC and Marvel fans who would rather go to a movie without spoiling big reveals beforehand.

While social media sites do their best to remove premature spoilers and leaks, they often spread so quickly that they are difficult to comprehend and thus impossible for fans to avoid. In the age of social media, spoilers and leaks may be an inevitability that fans just have to accept. If there’s one bright spot, the post-credits leak probably won’t dampen the overall excitement for Black Adamgrand opening weekend. For the few who have avoided the big spoiler lurking online, they will be able to experience Black Adam‘s post-credits will be revealed in theaters for the first time next week.

Next: Black Adam Revealed An Unfortunate Truth About DCEU’s Superman