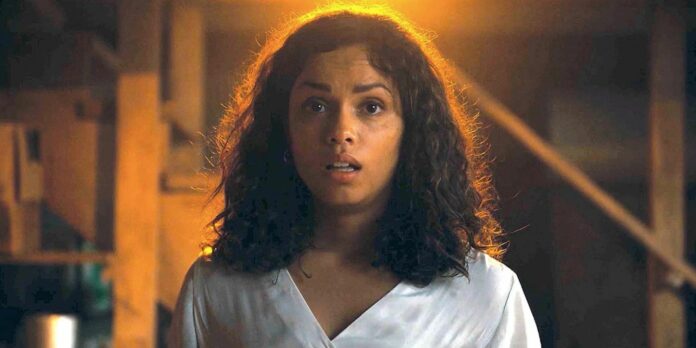 Warning: This article contains spoilers for BarbaraBarbarian star Georgina Campbell recalls how they shot one of the film’s most memorably disgusting scenes. The film, which debuted in theaters on September 9 and is now streaming on HBO Max, was directed by The Whitest Kids U’Know‘s Zach Cregger. It follows Campbell as Tess Marshall, a young woman who arrives at an AirBnb in Detroit the night before an important job interview. Her night goes from bad to worse when she discovers that the house is already occupied by another tenant named Keith (Bill Skarsgard). Things go from bad to worse when she discovers a secret maze of underground passages where a mysterious murderous woman known as The Mother wants to keep her captive.

One of the film’s most memorable and disgusting scenes comes in the second act, after the introduction of Justin Long’s character AJ Gilbride, a disgraced sitcom actor. He becomes trapped in a basement pit with Tess, where he discovers that The Mother intends to feed them both with a disused and incredibly gross baby bottle that she lowers through the bars. One of the key details that has provoked viewers into waves of nausea is the fact that there are hairs on the tip of the bottle that Tess grudgingly sucks on.

digital spy recently sat down with Campbell to discuss some of the film’s most memorable moments Barbarian. One that has stayed with her most is the same one that has touched audiences so deeply: that baby bottle scene. She reveals that many of the elements that made it into the final cut of the film were added as Cregger encouraged the performers and prop designers to keep escalating it, including Campbell’s sputtering the milk from her mouth and a key moment on which “suddenly there was a hairand the director kept asking for more to be added. Read her full quote below:

“It was usually hard not to laugh because as soon as that bottle came down, we were all like, ‘Oh my gosh, this is ridiculous.’

“The hair was a development. There is a lot of hair on it [The Mother]so I think we did a couple of takes and then we did a take where Zach yelled at me what to do so he said, ‘Let the milk sputter a little bit out of your mouth, get it dirty!’

“Suddenly there was a hair there and then he said, ‘More hair! Add more hair’, so someone comes in and slides her on it. It was disgusting. Yeah, what are we supposed to do for art.”

What’s especially interesting about this anecdote is the fact that Cregger ran his set as if he were filming a comedy, drawing on his experience directing films like 2009’s. miss march and an actor in series like demolished and about a boy. While there are comedic moments in the film, particularly in the early scenes where AJ hasn’t heard about the menace in his house yet, this bottle sequence isn’t one of them. However, the behind-the-scenes process Campbell describes sounds like it could have happened on the set of a show like The office where the writer-director spontaneously generates bigger and bigger moments to see how far he can push the material.

A typical horror movie isn’t necessarily made in this kind of environment, as fears have to be made subtle in order to properly influence the audience. However, part of the essence of why Barbarian is such a success is the way it embraces the sheer chaos of its material. Creating that scene by letting him live in the moment and keep escalating it ended up being the perfect way to make sure it was as outrageous as possible.

Next: Why Keith Had To Die In Barbarian (And What Happened To His Body?!)