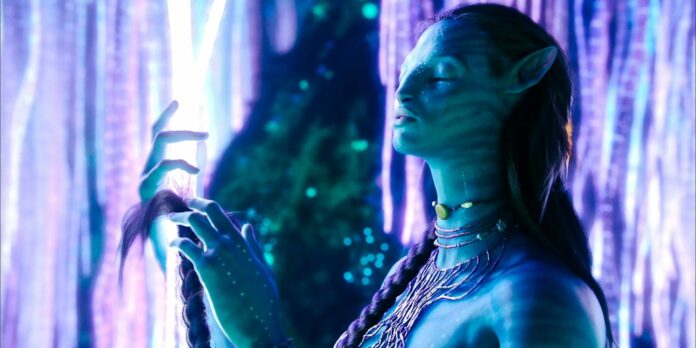 The final episode of Honest Trailers focuses on the remastered re-release of Avatar, poking fun at James Cameron’s affinity for scary ponytails.

On the heels of its 4K re-release, Honest Trailers is shining a spotlight on the Avatar remaster and mock James Cameron’s creepy alien ponytails in the film. Written and directed by Cameron, the 2009 sci-fi adventure film is set in the mid-22nd century and centers on Sam Worthington’s Jake Sully, a paralyzed Marine enlisted to venture to the alien planet Pandora, where humanity colonizes, in order to infiltrate the local people known as Na’vi to get to their valuable mineral known as unobtanium. As he gets closer to the natives, including the female warrior Neytiri, his loyalty is tested and he begins to question whether his mission is worth damaging the planet’s resources.

In addition to Worthington, the ensemble cast for Avatar included Zoë Saldaña, Stephen Lang, Michelle Rodriguez, Sigourney Weaver, Giovanni Ribisi and Joel David Moore. The sci-fi epic quickly became a pop culture phenomenon upon its release in 2009, scoring critical acclaim for its groundbreaking visual effects and becoming the highest-grossing film of all time, a title it would contend with. Avengers: Endgame in the years since, currently the best of the Marvel Cinematic Universe movie grossing nearly $3 billion. The film’s success led Cameron to initially partner with 20th Century Fox for four years Avatar sequels, which would be produced on a combined budget of $1 billion, the first of which is due out in December after several delays. As audiences gear up to return to Pandora, some are looking back and having a good laugh at some of the original’s flaws. Avatar.

Related: What Does Success Really Mean for Avatar 2? Is $2 Billion Enough?!

screen junkies released the next episode in their Fair Trailers series, focusing on the Avatar remastered reissue. The video features a new batch of jokes for the record holder at the box office, mocking James Cameron’s affinity for creepy alien ponytails. Watch the hilarious video above:

How the Avatar Persecutions the Na’vi. will continue to develop

The alien ponytails from the original Avatar The film proved to be one of the biggest talking points among the public after its release, with some mocking the very bizarre connections they had made between the Na’vi and everything on the planet. Although a point of hilarity for some in the 2009 film, the first images and trailers for Avatar: The way of the water have given a glimpse of how the highly anticipated sequel will continue to evolve the Na’vi and their unique biomes, including a pregnant member of the Metkayina, which Kate Winslet’s Ronal is a part of. While the sequel’s title hints that only the water tribe will be explored, it’ll be interesting to see if Cameron introduces other clans before moving on to other clans. Avatar prosecute.

Another thing the public is eagerly awaiting is how Avatar: The way of the water will avoid the story criticism of its predecessor. As indicated in the Avatar Honest trailer remastered, some critics disagreed with the original movie’s plot which essentially pulled it off Dancing with wolves, Ferngully: the last rainforest and pocahontas with minor changes for James Cameron’s film. Only time will tell if the wait is worth it when Avatar: The way of the water opens in theaters on December 16.

Next: Avatar 2’s long development is actually impressive (because of Titanic)Source: screen junkies