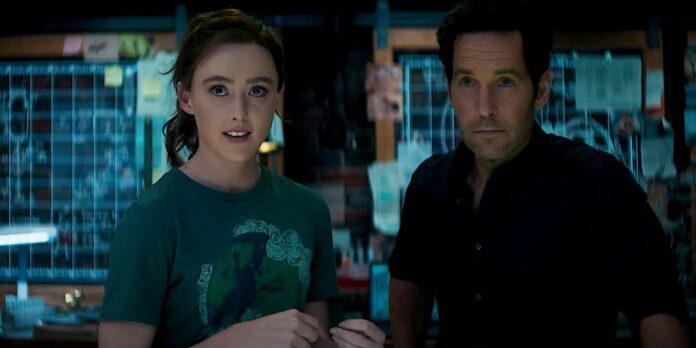 Kathryn Newton shares details about her character Cassie Lang’s story Ant-Man and the Wasp: Quantumania. Newton’s Cassie Lang, who was previously played by Abby Ryder Fortson and Emma Furhmann, is the role’s third iteration and the character’s first appearance since Avengers: Endgame. Sided out as a supporting character in the first two ant man movies, Quantumania sees Cassie promoted to the main cast, alongside Paul Rudd, Evangeline Lilly, Michael Douglas and Michelle Pfeiffer. The first official Ant-Man and the Wasp: Quantumania trailer was released on October 24.

The upcoming movie takes place after the events of Avengers: Endgame; since then, Scott Lang (Rudd) has become a celebrity to the public and the host of a popular podcast. After his daughter, Cassie, sends a signal to the quantum realm, they, along with Hope van Dyne (Lilly), Hank Pym (Douglas), and Janet van Dyne (Pfeiffer), find themselves trapped in the quantum realm. They are offered conditional help by super villain Kang the Conquerer (Johnathan Majors), an alternate timeline variant of He Who Remains, first seen in Loki. At San Diego Comic Con, Ant-Man and the Wasp: Quantumania was announced as the first film of Phase Five of the MCU.

Related: Marvel Puts Kang On As An Avengers Villain, Way Better Than Thanos

In an interview with Entertainment tonight at the Women in Film Honors gala in 2022, Newton shares her feelings for portraying Cassie Lang and teases her character’s journey. Newton was eventually able to connect with Cassie during filming Ant-Man and the Wasp: Quantumania, because they share similar properties. She says:

“I’m really not perfect and I’m super impatient and I want to be a hero but I have no idea what I’m doing and I think Cassie Lang is like that. She’s just trying to figure out how to be a good person and “You know, making a lot of mistakes. She’s a bit of a mess and so am I… You’ll definitely see some of that. But a good heart.”

Newton’s emphasis on Cassie’s growth hints at a more fully fleshed out arc for the character — for the upcoming movie, but also for her future in the MCU in general. In the comic books, Cassie Lang is known as Stature, a powerful superhero who, unlike her father, can shrink and grow without a suit. Her more prominent role in Ant Man 3 seems to be building to this final status. With the rise of other young heroes, such as hawkeye‘s Kate Bishop, Cassie’s role will likely continue to grow as the MCU creates space for a new series of “Avengers.”

Newton’s casting Ant-Man and the Wasp: Quantumania itself also seems to point to a bright future for the character. Newton is a young but established actress with a number of credits to her name, including television series Big Little Lies and The communityand movies like Detective Pikachu. It was widely speculated that Cassie Lang’s reshuffle was due to Newton’s industry experience and well-received performances. Now, as part of the MCU, Newton will be launched to an even higher level. Hopes are high that she will lead Cassie’s journey for the long haul as she kicks it off in the final ant man installment.