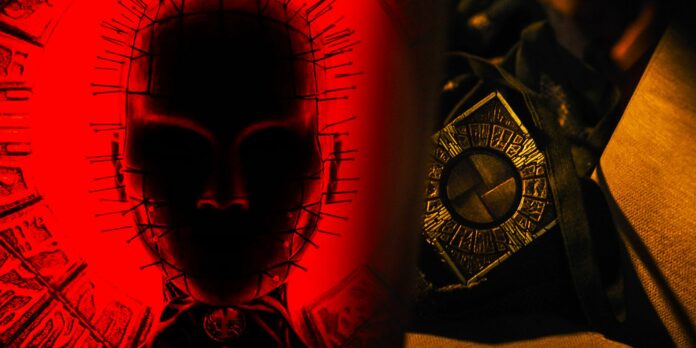 the 2022 Hellraiser reboot brings back the series’ signature puzzle box and offers a fresh look at the six configurations. As the film progresses, protagonist Riley (Odessa A’zion) is forced to go through the box’s six configurations, each offering its own tantalizing promise. Hellraiser 2022 goes into explicit detail about how the puzzle box works, bringing clarity to the more mystical ideas of Clive Barker’s original film.

The puzzle box originally appeared in the 1987 Hellraiser, where solving the box undoes the barriers between dimensions and summons the Cenobites from Hell, where they can be negotiated with. Other books and movies in the Hellraiser universe provides more details about the origin of the puzzle box, revealing that the first boxes were created by 18th-century French occultist Philip LeMarchand. The boxes in both the 2022 Hellraiser reboot and the original 1987 movie are based on LeMarchand’s original “Lament Configuration” or “Box of Sorrows” design. In the 2022 movie, the box changes configuration every time the blade sacrifices someone to the Cenobites. The holder of the box can fulfill their wish by giving the Cenobites enough casualties to reach the sixth configuration, Leviathan. However, such wishes can be very dangerous. These are the six configurations shown in 2022 Hellraiser.

The Lament configuration is the Hellraiser the original cubic state of the puzzle box and is therefore often used as the name of this design. Lament means ‘life’ and choosing this configuration seems to be the only way to escape the clutches of the Cenobites with sanity intact. Riley chooses this configuration at the end of Hellraiser when she asks nothing of the Cenobites and is told by Jamie Clayton’s “Priest” Pinhead that her wish to leave will be granted. The price of the lament configuration is that Riley will have to live with the choices she made during her encounter with the Cenobites and the thought of what she could have done with her power – hence “lament.”

The Lore configuration is the second to appear in Hellraiser and is associated with knowledge, presumably of the strange cosmology only suggested by the existence of the Cenobites. the 2022 Hellraiser film doesn’t reveal much about the lore configuration – which takes the form of an eight-sided diamond atop a cube, creating a chaotic angular shape – or its consequences.

Progress HellraiserAs it relates to the dark side of eroticism, the Liminal configuration is dedicated to hedonic sensations and takes the form of two intersecting trapezoidal shapes. Roland Voight (Goran Višnjić) first used this configuration in search of a thrill beyond that on Earth, but he was unprepared for the sadistic delight of the Cenobites and ended up with a metal device that resembled the shape of the Cenobites. box embedded in his chest, creating endless pain.

The Lazarus configuration, which resembles an inclined rectangular prism, is named after the biblical Lazarus. This plays a role in Hulu’s Hellraiser reboot when Riley initially plans to use this configuration to resuscitate her brother, who falls victim to the puzzle box that tries to save her from what he believes to be a drug relapse. In the end, however, Riley decides not to use the box in this way, and it is not known what disadvantages this power would have had.

The Leviathan configuration is shaped like an eight-sided diamond with sharp points and represents the final shape of Hellraiserthe puzzle box. After completing this formation, the holder of the box can receive the gift corresponding to one of the six configurations. Using his second chance to choose Power, Roland Voight is transformed into a Cenobite. In earlier versions of HellraiserLeviathan refers to the ruler of hell commanding the Cenobites, who is depicted in Hellraiser II: Hellbound like a giant pane. This may still be the entity that grants wishes and creates Cenobites in the Hellraiser reboot, hence the name of the Leviathan configuration.

How Hellraiser 2022’s Puzzle Box Compares To The Original Movie

Compared to the puzzle box in the 1987 Hellraiser movie, the one at the center of Hulu’s 2022 reboot is much more complex. The earlier puzzle box only has one configuration, which summons the Cenobites once solved. The box from 1987 has been solved by both Frank and the original Hellraiser heroine Kirsty Cotton and seems to have some kind of compulsion that tempts people to solve it. The Cenobites can also be banished back to their realm by inverting the box’s solution. The Cenobites’ powers aren’t exactly tied to any configuration of the box in the original Hellraiserand the requirement to kill other people is also new to the 2022 reboot.

These differences show how much more complex HellraiserThe lore and universe have grown into more than 11 movies and accompanying books and comics. In Clive Barker’s original story, the Cenobites and puzzle box are more of a metaphor for the pursuit of hedonistic pleasure at all costs. the 2022 Hellraiser On the other hand, adaptation provides a much more specific and complex account of what the Cenobites can do for and for those who summon them. As the Hellraiser reboot is popular enough and leads to further stories in a similar vein, they could explore further what all six configurations mean, the depths of the realm of the cenobites, or possibly the rules for other puzzle boxes in the Hellraiser universe. Which version is more attractive depends entirely on the taste of the viewer.

Next: Hellraiser 2022 End Explained (In Detail)